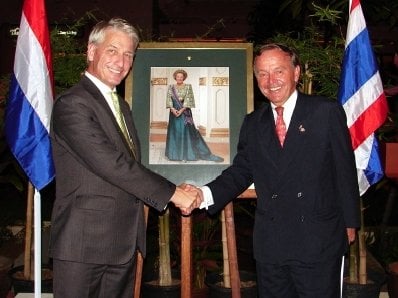 PHUKET: Netherlands Ambassador to Thailand Tjaco van den Hout last night praised the work of honorary consuls, saying it was a “thankless” job requiring the consuls to be available at all hours to attend to often “grisly” affairs.

“I am so happy to have a consulate here to take care of an estimated 1,500 to 1,800 Dutch residents in this part of Thailand,” he said.

The number of Dutch nationals coming to Phuket and neighboring areas is continually increasing and is currently more than 200,000 a year, he added.

The ambassador was speaking at the official opening of the Netherlands Honorary Consulate in Phuket, marked by a party at Centara Grand Beach Resort Phuket last night.

“It’s not just his great pedigree and fine experience which makes him suitable for this role, he has actually held a very prominent position in the field of national promotion and he has done that with great distinction,” he said.

“The role of honorary consul is a thankless one. It requires you to be available at any moment day or night and for very little reward, because it is an honorary position,” said the ambassador.

Mr Van den Hout pointed out that Mr Smulders had been acting as the de facto Dutch honorary consul for the past 18 months. “In that short time he has had to deal with some grisly consular tasks, and he has done that in that very proper manner,” he added.

Mr Smulders passed the compliment on to his counterparts. “I would like to express my gratitude to my colleagues, other honorary consuls. I feel privileged to be officially a part of this formal association and look forward to working with you in the future.”

In response to the growing need for Gazette readers to contact their consular representatives on Phuket, the Gazette Guide now includes contact details for all 17 active honorary consulates on the island that co-ordinate through official meetings every three months.