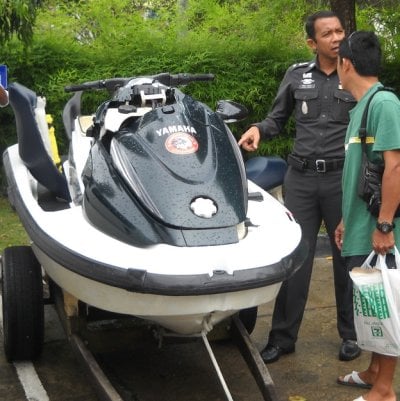 PHUKET: A Chinese couple on their honeymoon died this morning after the jet-ski they were riding on slammed into a catamaran.

Police confirmed to the Gazette that the accident occurred about 11am nearly a kilometer offshore from the bridge at the south end of Patong Beach.

Zhao Qiang and his fiancee Chu Fang, both 28, suffered serious trauma to their necks, chests, arms and legs.

Police said the couple had rented the jet-ski from Manas Promniyom.

Mr Zhao drove the jet-ski from the beach, but rain began to fall about five minutes later, reducing visibility to about 50 meters, said police.

While out on the water, Mr Zhao switched places with Mrs Chu. Police believe it was her first time driving a jet-ski.

Witnesses told police that the jet-ski plowed into a big wave. This might have frightened Mrs Chu, causing her to grip harder on the throttle, accelerating the jet-ski into the anchored catamaran.

The couple arrived on Sunday with an Asia Company tour group of nine other Chinese tourists.

They were due to fly home tomorrow morning with the rest of the group.

The tour group went to Koh Hei today, but Mrs Chu said she was sick and did not want to go.

The guide leading the tour group told the Gazette that he expressly told the tour group not to rent a jet-ski, as most of them could not drive well and many Chinese tourists had accidents with jet-skis in the past.

In April this year, Singaporean tourist Loh Ying Jie, 20, died from head injuries after being struck by a jet-ski being driven by his friend Tang Jun Han off Patong Beach.

The Singaporean State Coroner ruled the death as “misadventure”.