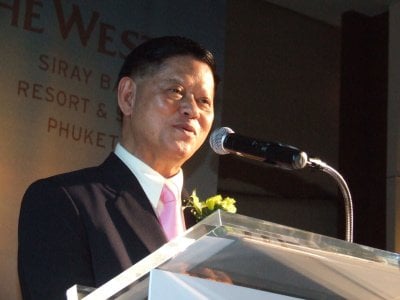 PHUKET: Tourism and Sports Minister Chumpol Silapa-archa on Monday had good news for sports development on the island.

Phuket had applied for 700 million baht to develop and prepare the island to host the Asian Beach Games 2014.

Instead, the central government has approved nearly a billion baht, he said.

“Phuket will host the Asian Beach Games in 2014, and right now I’ve got nearly a billion baht available for the event. The event will make Phuket more famous,” Mr Chumpol told the 200 attendees at the grand opening of the Westin Siray Bay Resort & Spa Phuket.

The minister also floated the idea of land reclamation in Phuket. “Phuket could be like Dubai and create more land for development.” he said.

“I felt a little scared when the plane was landing at the airport,” he added, pointing out that perhaps the runway could be extended into the sea as is done at many international airports. He cited Hong Kong as an example.

Reflecting on the his previous visit to Phuket, Mr Chumpol said, “This is the first time in nearly 20 years that I’ve been to Phuket, and there have been many changes.

“For example, Kata-Karon was quiet countryside in the past, but now it’s much more developed.”

Regarding complaints from foreign tourists, the minister said, “I would like local organizations to focus not only on the money generated by tourism, but to also take good care of our tourists.

“I have received a lot of complaints about ‘local people’ trying to drag tourists [at the airport] to go along with them,” he added.

“Last year, we expected about 14 million tourists to visit Thailand, but the number was more than 15 million because of Phuket,” said Mr Chumpol.

In closing, the minister praised the timing of the resort’s grand opening. “To open the Westin at this time is quite wise as it’s high season and many people are coming to Phuket,” he noted.