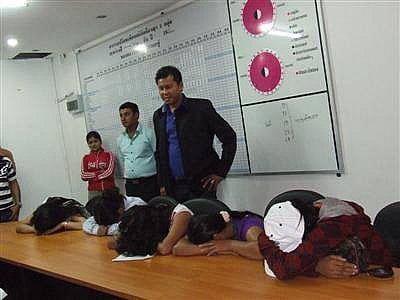 PHUKET: Over 200 ethnic Nepalese converged at Patong Police Station last night to protest the actions of a Thai man they allege raped at least four members of their community and stole and extorted valuables of several other Nepali women.

The alleged rapist, 29-year-old Phakpoom Maneerat, was arrested in Phuket Town at about noon yesterday.

A native of Nonthaburi province, Mr Phakpoom is married to a Phuket woman and has lived on the island for seven years, police said.

The protesters arrived at 7:30pm and stayed until 10pm, when they complied with a police request to leave.

One of the alleged victims, a Nepali woman in her early 20s, filed a complaint with Phuket Provincial Police in May last year.

She was approached by a man in a car as she walked to her job at the Jungceylon shopping center in Patong on May 4 last year.

According to the statement, the man identified himself as an officer of the law and demanded to see her worker identification papers.

Noticing the documents had expired, he drove to Patong Police Station and went inside, leaving the woman alone in the locked car with the engine still running.

He returned about three minutes later and said he would have to drive the woman to Immigration Headquarters in Phuket Town.

He stopped at a service station in Phuket Town, where he offered to “deal with” the expired ID card in exchange for a cash payment of 15,000 baht, the woman wrote in her complaint.

When the woman said she only had 3,000 baht, he demanded that she hand over her gold necklace and bracelet and a Nokia mobile phone valued at 7,000 baht before driving back to Patong.

She said she was told she could meet the man at the station the following day, but he never appeared.

The woman met with Thai-Nepalese club president Phanuphong Limbuprasertkup and filed a complaint with provincial police the same day.

Mr Phanupong said that other ethnic Nepalese living in the area had been extorted in a similar fashion and that at least four had been raped by the same man.

Alleged victims appeared in the conference room at Patong Police Station this evening, heads down to protect their honor.

There to hear their grievances was Patong Police Superintendent Arayaphan Pukbuakhao.

A press conference is scheduled for tomorrow morning.

Mr Phanupong said there were about 2,000 ethnic Nepalese living in Phuket.

It is understood that many are refugees from lands controlled by the Burma junta.

They typically work in the Phuket tourism industry, using their English language skills to sell souvenirs, DVDs and tailoring services to foreign tourists, even though retail sales work is legally restricted to Thai nationals in the Kingdom.

No landslides in Phuket: Officials