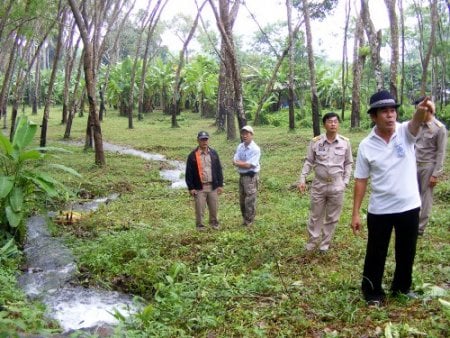 The two top officials inspected Baan Phru Somparn in Thepkrasattri Subdistrict and Baan Mak Prok in Mai Khao, both in Thalang District, after the government Disaster Relief Committee included the two villages on its long list of areas at risk of landslides in the South.

The warning advised the areas to be evacuated.

Baan Phru Somparn and Baan Mak Prok were the only two areas in Phuket on the committee’s list of at-risk areas.

After surveying the areas surrounding both villages, Vice Gov Nivit told local residents not to worry about landslides because there were no dams or weirs in the hills above the villages that could cause flooding.

There were “smaller” hills in the area planted with rubber trees, but no big hills, he said. The water running in canals down them was clear, not red, which would indicate there is no threat of flash-flooding, he added.

V/Gov Nivit explained that community leaders and local authorities for both villages were notified of the warning immediately and closely monitored the situation around the clock in case evacuations were necessary.

The unnecessary anxiety caused by the warning and its potential impact on Phuket’s tourism industry angered Mr Nivit.

“Visitors might go somewhere else if they hear about flooding in Phuket. I can confirm now the situation is normal. Phuket has had no [serious] floods and no landslides. And the rain will stop soon,” he said.

Wirote Manajit, chief of tambon Mai Khao, said villagers were in a state of panic after hearing about the landslide warnings.

“Especially on Thursday night, when the village public address system warned people to evacuate the area immediately. Nobody slept well that night. We all had to keep a close watch on the situation,” he added.