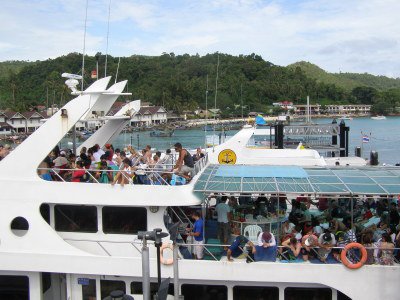 PHUKET: The directors of several national parks in the Andaman region have told the Phuket Gazette they have received good compliance with the ban on alcohol inside parks. The ban came into effect late last month.

Nontawit Jaturabundit, chief of the Sirinat National Park in Mai Khao, said, “Some people are still bringing alcohol into the park at night. We keep asking them to not bring alcohol and to refrain from drinking anywhere in the park, but we have yet to fine or prosecute anyone.”

“Many people were informed of the regulation during the new year period. They all seem to understand and have given us very good co-operation. The situation is under control,” he said.

Most of those warned about drinking in the park were Thais, but a few were foreigners.
“As the park is quite expansive, sometimes people might be drinking inside without our being aware of it,” he added.

Two signs declaring the park an alcohol prohibition zone are now being constructed and should go up at both entrances very soon, along with a third sign to go up in the middle of the park.

Under the law, offenders face a maximum fine of 1,000 baht or a jail sentence of not longer than one month, or both.

Chaitat Bunphuphantanti, director of Khao Sok National Park in Surat Thani, said, “We stopped selling alcohol about two years ago when the department issued a new regulation and then restricted people from bringing alcohol into the park on December 27.”

Standard procedure is for staff to ask people trying to bring alcohol into the park to leave it with officers during their visit, he said.

“We prefer to ask people for their co-operation rather than threatening them with punishment. It seems our public relations campaign is going well, as most people just drink Coke or water,” he said.

“Most foreigners understand quite well. Not many of them drink whiskey, but some like to drink beer. But they don’t seem to have any problem with alcohol being unavailable inside the park and they tend not to bring their own alcohol with them like Thais do,” he said.

Signs in Thai declaring the park alcohol-free are posted at the national park office and at Ratchaprapa Dam, he said.

“Most tourists visiting the national park are foreigners. We have officially informed tour business operators by letter and asked them to stop bringing in alcohol aboard boats. We seem to be getting a good response,” he said.

“People come to visit during the day. It is not an overnight destination, so there aren’t problems with people getting drunk.

“But we keep telling people not to bring alcohol on shore,” he said.

Chief Niroot quipped that many visiting tourists are mao (drunk) upon arrival by speedboat, mao reua being the Thai term for seasickness.

“The national park doesn’t have any problems at all with tourists being mao. They have to sit in a boat for a long time to get here from Phuket.

“If they are already a bit sick when they arrive, alcohol will only make them worse,” he said.

All of these factors made it highly unlikely that drunken mayhem of the kind that transpired at Khao Yai would ever take place at the park, he said.

“Some tour operators provide beer with their clients’ meals to relax them, but they don’t want them getting drunk while still on the speedboat.

“We will warn them first not to bring alcohol ashore before fining them,” he said.

The park plans to put up signs.