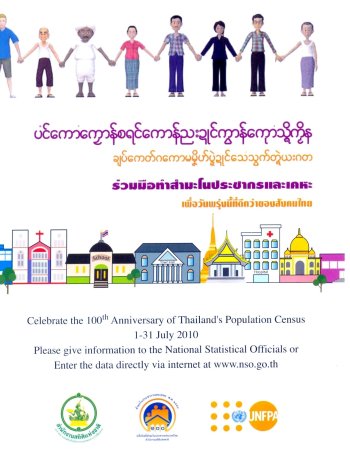 PHUKET: Thailand’s national census-taking in now underway in Phuket, which is the first province where the data collection is taking place.

Phuket Provincial Statistical Office (PPSO) chief Yuthachai Apichaicharnkit said the census, held every ten years, was initially slated to begin nationwide on July 1, but had to be postponed to September 1 due to the civil unrest in Bangkok in May and June.

In Phuket, students from Phuket Rajabaht University (PKRU) will do the door-to-door data collection.

As there was no violence in Phuket and the students need to sit exams in September, Phuket was allowed to begin the data collection at the originally scheduled time.

Mr Yuthachai, 59, said that for the first time all residents of the island, including foreigners, would be included.

This includes foreigners who have been living in Phuket for at least three months and plan to stay here, as well as low-wage workers from neighboring countries.

There could be as many as 100,000 low-wage workers from lands controlled by the Burmese junta in Phuket, by some estimates.

The Rajabaht students, mostly young women, will need to enter Burmese workers camps to try and get an accurate assessment of their numbers.

To assist in this, fellow Burmese who can speak Thai will help the workers understand that the census will not have any effect on their lives or work in Thailand – even if they are illegal.

If a person’s main residence is elsewhere, not in Phuket, then the survey will count where they are physically present most of the time, Mr Yuthachai said.

“Accuracy is important because the census data will affect government policies. For example, identifying an aging population will affect health care and welfare policies. Survey forms will be scanned by ICR [intelligent character recognition] scanners and staff have been trained in how to fill out the forms correctly so the scanners will read the data accurately,” he said.

Among the problems faced by the census-takers are rain, the two-month time limit to complete the data collection and an unwillingness on the part of many foreigners to take part.

All information collected is treated as completely confidential, he stressed.

“Some foreigners have refused to take part because they don’t understand what is going on. We would like them to understand that this will not affect any aspects of their lives, such as laws, taxation or immigration status. We just want to know exactly how many people are living in Phuket. The data will show only numbers, not details of the people surveyed,” he said.

Asked about the possibility of con-men posing as census takers, he said: “The students helping us wear their student uniforms and have university student ID cards as well as duty cards issued by the PPSO so the public can verify that they are working for us.”

In cases when staff cannot communicate with foreigners, intermediary forms in different languages will be used and staff will transfer the data onto the official statistics sheets later.

“We contacted all 17 honorary consuls in Phuket and we have received very good cooperation. British honorary consul Martin Carpenter has given advice on the forms, which are in English, French, Cambodian, Chinese, Japanese as well as in Thai…He estimates there are some 5,000 to 7,000 Brits staying in Phuket,” he said.

The census taking is the 11th in the Kingdom and also marks the 100th anniversary of census-taking in Thailand.

For an in-depth interview with Mr Yuthachai, as well as opinion and analysis, pick up a copy of the Phuket Gazette now on sale at newsstands all over the island.

Trawler sinks off Phuket after collision with barge