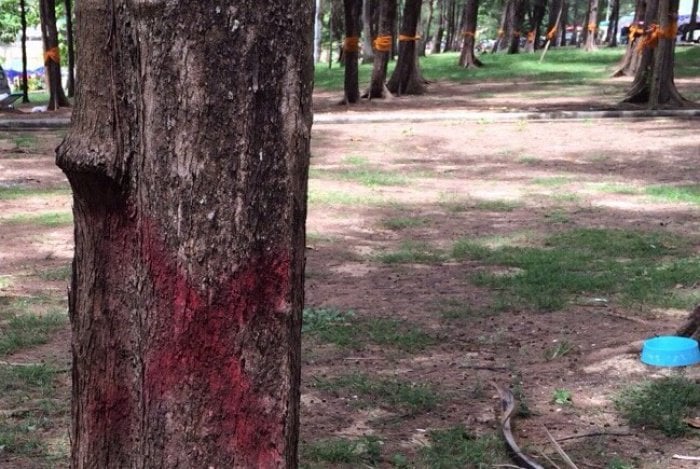 PHUKET: The Nai Harn Movie Museum will be re-designed to ensure that none of the pine trees along the beach front will be cut down.

The change in plans to the 40-million-baht facility comes after locals tied pieces of saffron fabric around the trees, threatening to have hundreds protest.

“We planned to cut down the trees because the roots can cause possible damage to the buildings,” Santi Pawai, director of the Ministry of Tourism and Sports Phuket Office, told the Phuket Gazette today. “However, the constructor will redesign the museum to ensure that no trees are harmed.”

The fast growing pine trees are about 30 years old and very important to the community, explained 41-year-old Sayjai Mueller.

“I am one of the people who helped grow the trees in this grove as a child. At first, we had no problem with the museum, as we didn’t realize they would be cutting down the trees,” Ms Sayjai said. “Who wants to come to see the movie museum when they come to the beach anyway? We need to be in nature, with families sitting among those trees, not against the wall of a museum.”

“We had no intention of causing harm to the area. We just wanted to build a new tourist attraction for visitors. A place where they can rest and also use the facilities,” said Mr Santi. “We don’t want to get pinned as the bad guys in this situation. There was simply a misunderstanding.”

The completion of the project, which officially started last month, will be delayed, Mr Santi confirmed.