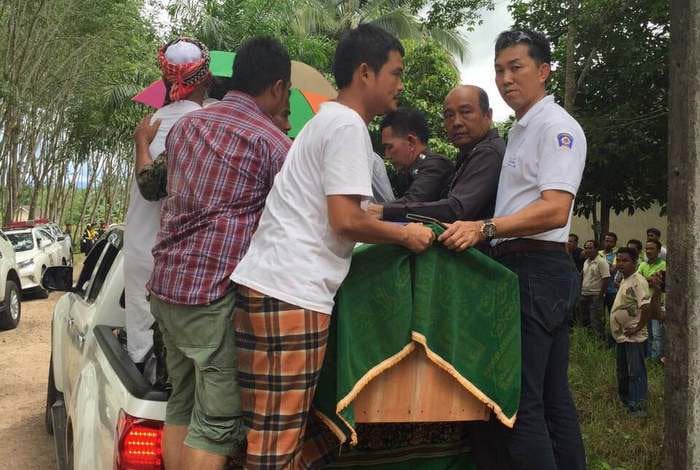 PHUKET: A civil case was brought against the drunk minivan driver who killed an on-duty police officer on Monday.

Sen Sgt Maj Suthat Songmuang, father of two, was promoted to Captain postmortem before he was buried yesterday. Region 8 Police gave 100,000 baht to his family.

CCTV footage showed Mr Pichitpol jumping a curb in the minivan and running over Capt Suthat at a u-turn near Phuket International Airport (video report here).

Mr Pichitpol had a blood alcohol content level of .076 per cent. The legal limit is .05 per cent.

Mr Pichitpol was charged with reckless driving causing death, as well as driving under the influence.

“I want this to be the last drunk driving death on the island. Maybe this will motivate police officers throughout the province to strictly enforce drunk driving laws,” said Col Teeraphol.

At the beginning of the month, police officers were given the green light to pull over and arrest anyone suspected of drunk driving in Phuket, after it was revealed that they would now need to make more than 150 drunk driving arrests a month (story here).

The following Saturday saw an Irish teacher from Satree Phuket School thrown in jail for drunk driving. Only days later, after filing a missing person report with the Tourist Police, were the friends of 35-year-old Eion Cahill able to locate him (story here).