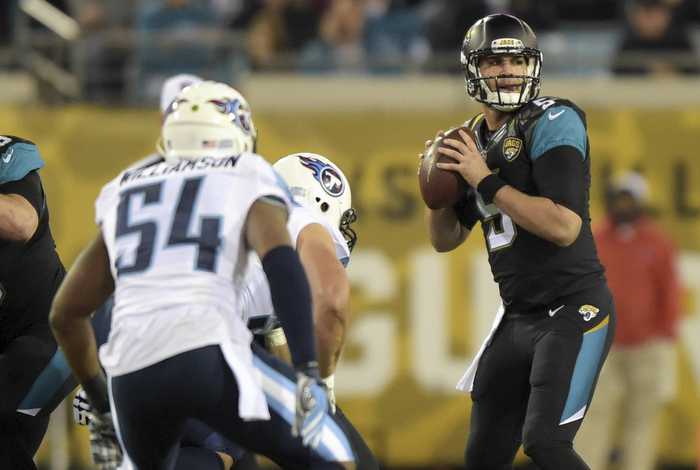 PHUKET: In a showdown on Thursday Night Football two of the worst teams in the NFL, the Jacksonville Jaguars improved their record to 3-12 with a 21-13 home win over AFC South division rivals the Tennessee Titans (now 2-13).

Despite both teams having long been eliminated from playoff contention, it was still a closely contested match; it did not appear that either side was tanking in order to get a higher first-round draft pick next year.

The win should bring some much-needed signs of hope to long suffering fans of the Jags, who went 4-12 last
year and have not had a playoff appearance since 2007.

It was the Jags second win in four weeks, and probably the best performance this year by their rookie quarterback Blake Bortles, who despite playing with an injured foot managed to scamper for 50 yards to convert some key third down plays.

This weekend will give NFL fans in Phuket some extra viewing options, as it has scheduled two Saturday
games that will be shown here locally on Sunday morning.

The first will be an NFC East match between the Philadelphia Eagles (9-5) and the foundering Washington Redskins (3-10). After last week’s disappointing home loss to Dallas (10-4), the Eagles are now in second place in the division and could miss the playoffs, even if they win their two remaining games. The Skins will no doubt be looking to play the role of spoiler again. [NFL Network, 4:30am Sunday]

At 8:25am on Sunday (CBS), the San Francisco 49ers (7-7) will host the San Diego Chargers (8-6). The Chargers desperately need a win to stay alive in the AFC wild-card hunt, while the talented yet disappointing 49ers have already been eliminated, and will be searching for a new coach next year with the imminent departure Jim Harbaugh at the end of this season. The outcome could rest on the shoulders of 49ers quarterback Colin Kaepernick, who has clearly lost confidence in his ability after leading the 49ers deep into the playoffs in his first two campaigns. Both teams are really banged up going into this one.

Other games with important wild card implications are: Kansas City Chiefs at Pittsburgh Steelers (1am Monday, CBS); Indianapolis Colts at Dallas Cowboys (4:25am Monday, CBS) and the Monday Night Football clash between the Denver Broncos and Cincinnati Bengals (8:30am Tuesday, ESPN).
Denver has clinched its division, but needs a win to stay apace the New England Patriots for the top seed in the AFC East. The Pats (11-3) will take on division rivals the New York Jets in Foxborough (1am Monday, CBS).

The most highly-anticipated match-up of the week will be the Sunday Night Football clash between NFC West leaders the Arizona Cardinals (11-3) and division rivals the Seattle Seahawks (10-4).

With a win, the Cardinals can clinch the NFC West, as well as home-field advantage throughout the playoffs. A loss could see them sink into the much tougher wild-card scenario if Seattle were to take the division.

Seattle, the defending Super Bowl champs, won a defensive battle 19-3 at home last month in the teams’ first meeting. The Cardinals, while still a perfect 7-0 at home, will be starting unproven third-string quarterback Ryan Lindley and will likely have a very hard time moving the ball against the NFL’s best defense. Seattle will also be up against an elite defense, but they’ll be doing it with a very proven commodity at the helm with Russell Wilson at quarterback. Oddsmakers in Las Vegas may have factored that in by making the Seahawks the favorite by over a touchdown, despite playing on the road.

Army soldiers taken into custody for abducting foreigner in Phuket