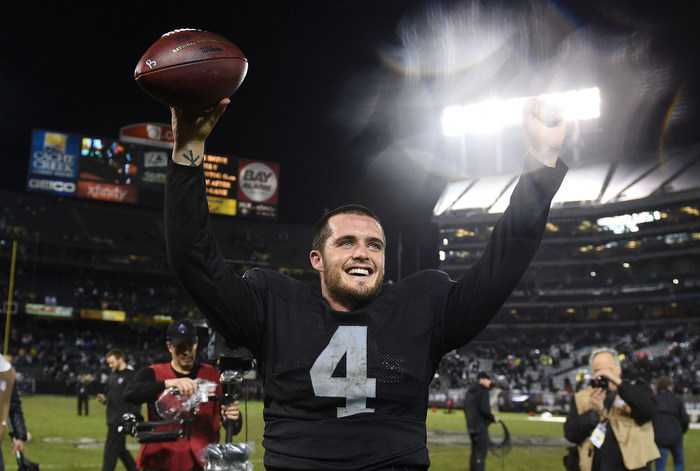 PHUKET: Beleaguered Thailand-based fans of the Oakland Raiders finally had a reason to cheer on Friday morning local time, when their team chalked up its first win of the season, 24-20, against AFC East division rivals the Kansas City Chiefs on Thursday Night Football (TNF).

Even though playing in the friendly confines of Oakland Alameda County Coliseum, the 0-9 Raiders were big (+8) home dogs (underdog playing at home) going in against the Chiefs.

Kansas City went into the game tied at the top of the AFC West with the Denver Broncos at 7-3, with earlier wins in the season including a Week 4 annihilation, 41-14, of the New England Patriots.

Many earlier TNF matches have been blowouts, with some analysts complaining that the mid-week match-ups, now carried exclusively by the NFL Network, put profit before player safety because they don’t give players time to recover from the previous game, or sufficiently prepare for the match-up.
Defenders point out that both teams go into the games under the same conditions and also enjoy a “mini-bye” (typically 10 days of rest) before the next game.

That debate notwithstanding, the TNF games are a real treat for us so-called “international fans”, especially those of us here in Phuket, as they give us an extra slice of NFL action to enjoy during daylight hours.

Yesterday’s game was full of drama. Oakland’s rookie quarterback Derek Carr continued to look inconsistent early in the game, but the Raiders managed to build a two touchdown lead thanks to an impressive performance by their new starting running back Latavius Murray.

Murray rushed four times for more than 100 yards, much of that accrued on a 90-yard scoring run in which he blew right past the entire Chiefs’ secondary.

In what might have been a tremendous blow to the raucous and rowdy crowd in Oakland, Murray left the game seeing stars late in the second half after a serious hit to the head on a kickoff return left him temporarily unconscious. He also fumbled on the play. The Raiders maintained possession, but the loss of Murray shifted the balance of the game.

In the second half, Chiefs quarterback Alex Smith threw two touch down (TD) passes and the Chiefs fought back to take the lead. But Carr rose to the occasion with a 17-play, 80-yard drive that ended with a 9-yard TD pass to James Jones with less than two minutes remaining.

The final minutes were gripping, with the Oakland defence getting lots of pressure on Smith, who had two big passes that should have been caught muffed by his receivers.

Much of the credit down the stretch had to go to Raiders veteran lineman Justin Tuck. In addition to his pressure on Smith, he called a head-up time out to save two younger teammates from a penalty after they foolishly celebrated a sack of Alex Smith with the clock still ticking.

After time ran out, the Raiders fans, who are famous for dressing up as if every game were played on Halloween Night, celebrated as if they had won the Super Bowl. Meanwhile, Quarterback Carr thanked his Lord and savior Jesus Christ for the victory.

“I thank Jesus. You know I have been through a lot of hard times and these losses have been hard. But I praise the name of God because he stayed faithful through it all… I can’t wait to see my teammates’ smiles because I play for my faith and I play for others,” he said.

This loss is one that could come back to really haunt the playoff-hopeful Chiefs. Next week they take on the Broncos at home before traveling to Arizona the following week to take on the 9-1 Cardinals.

There are some sweet match-ups this week.

In what has been billed as a potential “Super Bowl Preview,” the Detroit Lions (7-3) will travel to Foxborough to take on the New England Patriots (8-2). The Pats’ new power running back Jonas Gray, fresh off the practice squad, shocked fantasy football players by scoring four TDs and rushing for over 200 yards in their 42-20 win over the Indianapolis Colts last week. However, the Pats are unlikely to run the ball down the throats of the Lions, who have the stingiest run defence in the league and have kept the opposition to NFL-low 15.6 points per game. Expect the Pats to initially take to the air to extend their winning streak. Somchai’s pick: Pats.

The 9-1 Arizona Cardinals will travel to Seattle to take on defending Super Bowl champs and division rivals the Seattle Seahawks, who at 6-4 have their backs against the wall in the fight to make the playoffs. The Seahawks are almost always a lock to win at home, but it was Arizona who broke their 14-game home win streak with a gutsy 17-10 win last year. A key to success for the Cards will be scoring early and silencing the Seahawks famously loud crowd. Somchai’s pick: Cardinals.