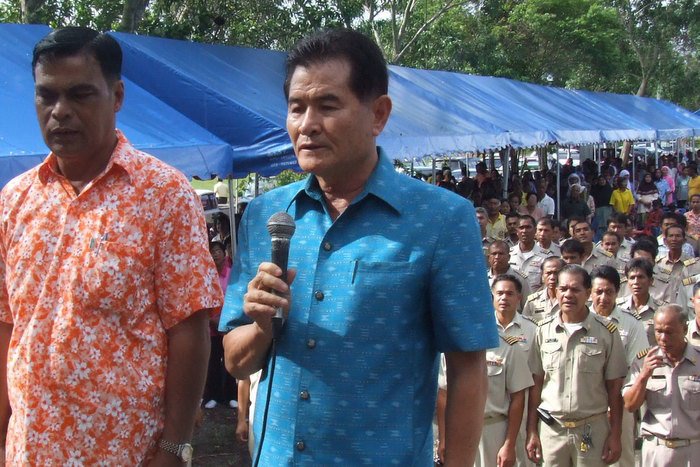 PHUKET: The National Anti-Corruption Commission (NACC) named names as it started gunning for local officials tangled up in millions of baht worth of infrastructure and illegal land issuance scandals in Phuket.

At the top of the list of 17 cases cited at a meeting led by Wicha Mahakun, spokesman for the NACC, on Saturday was that of former Phuket Governor Wichai Phraisa-ngop.

The original complaint against Mr Wichai, filed by Sirinath National Park Chief Kitiphat Taraphiban in September last year, centered on two Chanote titles, valued at more than 1 billion baht, that were issued in 2009 for land allegedly inside the park. The complaint accused Mr Wichai and several officials of abuse of power and reporting false information (story here).

The former governor is also at the center of cases involving allegedly illegally issued Chanotes for land on Coconut Island and in the Nakkerd Hills, as well as in Khlong Bang Chi Lao, Klong Tah Jeen and Khao Ruak-Khao Muang.

“Mr Wichai is accused of having asked for more than 150mn baht to issue these land titles,” said Mr Wicha.

Also named among the accused is former Vice Governor Weerawat Janpen. Mr Weerawat and a team of his officers are suspected of illegally issuing an Chanote title to Three Dolphins for land inside Sirinath National Park, as well as a conservation area in Khao Ruak-Khao Muang, in Thalang.

Last year, Nipon Chotibal, acting director-general of the Department of National Parks, Wildlife and Plant Conservation (DNP), told the Phuket Gazette that Three Dolphins, which owns the luxurious Trisara Resort, originally submitted a NorSor 3 Kor for 37 rai for an upgrade to a Chanote title. However, when the land was issued a Chanote, it was for 99 rai – not 37 rai. This led the officials to believe the Chanote had been wrongfully issued (story here).

At a more local level, the current Rawai mayor, Aroon Solos, is on the chopping block for issuing building permits for the Eva Group project, which is under construction in Rawai.

A trial regarding the project names Rawai Municipality and the provincial standing committee for approving initial environmental evaluations (IEEs) and environmental impact assessments (EIAs) as the accused.

The trial centers on whether or not the project in question breaches the building code and whether the building permits for the site were issued illegally (Special Report here and Eva Group response here).

In regards to the Eva project, Mr Aroon said he signed off on the permits as per his duty as approval letters came back from the environmental office.

Additionally, Mr Aroon is facing the music for allegedly costing the government an unnecessary 3.77mn baht for the Rawai pier project.

“Mr Aroon asked for about 49mn baht to build the pier, when the project actually cost about 46mn baht. We are still investigating this case,” said Mr Wicha.

Mr Aroon explained to the Gazette today that Rawai Municipality made a mistake in estimating the budget needed to construct the pier.

“When we were planning the budget and allocating funds, we made changes within the municipality staff who were involved in the project. I believe a mistake was made in handing over the project to the new staff,” he said.

“I am now negotiating with the pier construction company to see how we can spend the remaining funds on the bridge to ensure that the money isn’t wasted.”

When asked today about the alleged bribes, Mr Ma-ann told the Gazette that he was not involved, but admitted that the NACC had already questioned him about his signature on a check for the project.

Several other officials are being targeted for their alleged roles in illegal, related crimes – some of which were publicly named at the meeting, while others were not. Those named includes Somsak Eamthaisong, a former deputy chief of the Land Department; Phuket Land Office chief Paitoon Lertkrai and members of his team; and Wuthipong Promthawee, chief administrative officer (palad) of Chalong Municipality.

“We want to keep pushing these cases forward so we can close them and press charges against those we are able to gather enough evidence against,” said Mr Wicha.

To expedite its efforts, the NACC has confirmed that it will call on the National Council for Peace and Order (NCPO) to invoke Article 44 for more than 100 illegal land possession cases, many of which involve former and current high-ranking Phuket officials.

“These cases are challenging for us. We take them very seriously, especially those concerning land within Sirinath National Park,” said Mr Wicha.

“Currently, there are 85 cases under investigation that we are still collecting evidence on, and 35 of which are a bit further along in the legal process.”