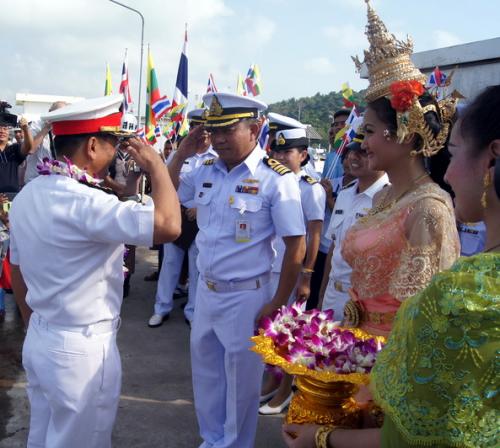 “Thailand is the first country we have officially visited since our country has opened up. We will be here for three days to promote goodwill between our navies,” Captain Aung Zaw Hlang said.

“We chose to come to Thailand first because we have always had strong relations. Our territorial waters also border each other, so we will discuss the possibilities of joint patrol missions and working together to protect our marine resources,” he said.

“The visit is designed to promote a stronger relationship between the two navies,” concurred Third Naval Area Commander Vice Admiral Tharathorn Khajitsuwan, who was also on site to greet members of the Myanmar Navy.

“Seven years ago the Thai Navy officially visited the Myanmar Navy for the first time – now they are paying their first official visit to us,” he added.