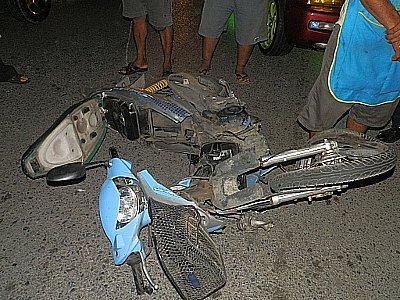 PHUKET: A Phuket motorcycle taxi driver was killed instantly last night when he was hit full force by an oncoming car while trying to make a u-turn on Thepkrasattri Road.

Thalang Police were notified of the accident at 9:20pm.

Arriving at the scene, on Thepkrasattri Road southbound in front of the electricity substation in Ban Lipon, they found the body of 56-year-old Sansern Kaewkham.

The late Mr Sansern, a local resident listed as residing at Srisoonthorn Village 5, was killed instantly from massive head trauma and other injuries.

Near his body was his crumpled Honda Wave and a Honda Jazz car, the front driver’s side of which was also badly damaged by the impact.

The driver did not flee the scene, but was removed from the area quickly for his own protection because Mr Sansern was a local resident with many relatives in the area, a rescue worker at the scene told the Phuket Gazette. A witness told Thalang Police duty officer Patiwat Yodkhwan that Mr Sansern was at fault for the collision. After heading northbound, he turned into oncoming southbound traffic at the u-turn, giving the driver of the Honda Jazz no time to slow down or brake.

The 44-year-old driver of the Phang Nga-registered Jazz is a resident of Takua Thung District.