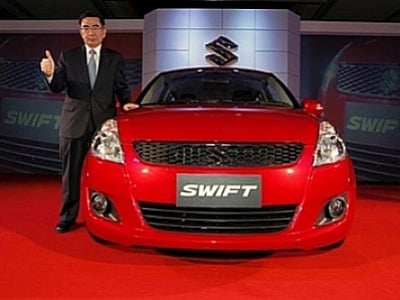 Suzuki Motor Corp’s Executive Vice President Toshi Hiro said three versions of the eco-Swift will be available on the Thai market at prices ranging from 469,000 baht to 559,000 baht (US25,370 to 18,328), inexpensive by Thai standards.

The launch of the model, designed to run more than 20 kilometers per liter of fuel, followed a similar launch by Mitsubishi Motors Thailand of its new Mirage model on Tuesday.

Nissan Motor Corp was the first to produce a Thai-made eco car, the March, in 2010, before Honda Motor Co Ltd launched its competing Brio last year.

While Nissan’s March has enjoyed sales averaging 3,000 units a month in Thailand, the launch of the Brio was dogged by the mass floods that inundated the Honda factory in central Thailand in October, halting operations for months.

The factory is scheduled to re-open on March 31. Honda on Wednesday denied news reports that the flood had led it to shift its major production hub from Thailand to Indonesia, where it has been investing.

“The plan for the Indonesian expansion was in place well before the flood,” the company said in a statement.

The Jakarta plant, which aims to supply the Indonesian demand for small cars, would, however, produce an Indonesian version of the Brio instead of importing cars produced in Thailand.

Toyota is expected to launch a new compact model for the Thai market by the end of this year.

Thailand designed the program to attract new investment to its automotive industry, the world’s second-largest producer and exporter of 1-ton pickup trucks.

The eco-car is designed for urban, cost-conscious customers.

Under the program, manufacturers must produce at least 100,000 units annually by their fifth year of operation.

Wandee Khunchornyakong, chairman and chief executive officer of SPCG, said that these would compliment the company’s 34 solar farm projects, of which 7 have been completed and supplied power to the Provincial Electricity Authority. Nine are under construction and 18 would start construction within this year. Their combined capacity is 240MW.

To Peerawat Pumthong, chief operating officer of Ratchaburi, added that the new projects would help the company achieve its goal to expand its renewable energy business, in light of higher fossilized fuel prices. Aside from partnership in the three projects, Ratchaburi also looks for cooperation in other projects in the near future.

“The loan reflects the projects’ potential. While the banks show confidence in the projects, we’re convinced that renewable energy development would win strong support from all parties involved,” Peerawat said.

PHUKET (The Nation): The Board of Investment (BOI) will discuss with Prime Minister Yingluck Shinawatra a policy to woo Japanese battery-makers for electric cars to set up production bases in Thailand.

BOI secretary-general Atchaka Sriboonrueng Brimble said the agency would talk with the prime minister on policy and investment conditions for the production of batteries for electric cars and they are expected to be finalized soon. It also will meet with a major Japanese battery maker at its next roadshow in Osaka to discuss the matter.

She added that judging from talks with leading Japanese car makers, they are of the view that there is a possibility of manufacturing electric cars here.

The BOI currently offers tax incentives for the manufacture of high-technology batteries for electric vehicles (EVs), including a corporate-tax waiver for eight years, and the investors can operate in any zone.

An industrial source said there was a high chance of an investment for the manufacture of electric-car batteries in Thailand.

Meanwhile, Takayuki Sugiyama, president of Suzuki Motor (Thailand), said the company had introduced three models of the redesigned Suzuki Swift eco-cars, featuring a 1,242cc engine. It aims to sell 10,000 Swifts in Thailand in the first year and export 5,000. The debut will help boost its total car sales to 20,000 units this year against 9,600 last year.

Toyota Motor (Thailand) is ready to invest in an EV programme in the Kingdom if BOI plans to extend its eco-car project to such projects.

Vice chairman Ninnart Chaithirapinyo said yesterday that the company had supported many projects launched by the government such as the production of vehicles fueled by E85 (85-per-cent ethanol) gasohol or natural gas.

“However, the EV project also depends on the infrastructure of the country,” he said.

Ninnart said Toyota was not worried about the high competition in the eco-car market. He said the Vios and Yaris were still gaining popularity among customers, resulting in orders for 10,000 units a month. This would take Vios sales to no fewer than 100,000 units this year.

A source in the car industry said Toyota could possibly revise its car sales target for this year to 500,000 units from the previous target of 450,000 units.

PHUKET (The Nation): Thailand yesterday hosted the world premier of the Mitsubishi Mirage eco car in its role as the sole manufacturing base for the “Global Small” model.

Mitsubishi is preparing to develop an electric version of the Mirage, which would take two years before production is started. Whether Thailand is chosen as the production base of the electric model depends on its readiness to make batteries, which are a key component.

The Mirage is Mitsubishi Motors’ first eco car under the “Global Small” project aimed at serving the rising demand for cars in emerging economies.

The Mirage is assembled at Mitsubishi’s new Bt16 billion plant in the Laemchabang Industrial Estate. It is also the biggest production base outside Japan.