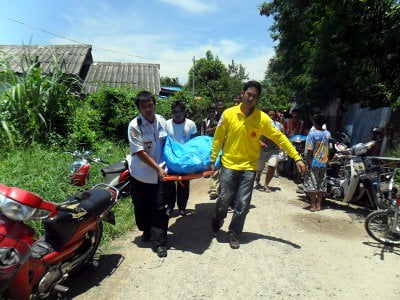 PHUKET: A mother watched helplessly today as her son drowned in a tin mine lagoon behind the family home north of Phuket Town.

Kusoldharm Foundation rescue workers and Phuket City police officers arrived at the scene, in Soi Haad Saen Suk 2 in Rassada, at about 10:30am.

It took them about an hour to retrieve the body of Weeranan Sae-Ong, 22, from the water.

Mr Weeranan’s mother, Nongyao Sae-Ong, said her son wanted to go to his aunt’s house on the other side of the lagoon to get petrol for his motorbike.

She told him not to use their boat because it was leaking.

While Ms Nongyao went to the toilet, her son abided by his mother’s wishes and did not use the boat.

Instead, he started swimming to his aunt’s house without his mother knowing.

Ms Nongyao learned of this only after she heard his shouts for help, but when she came out from the house, all she could see of her son were his hands thrashing in the water about 50 meters away.

She believed he developed a cramp in his leg.

“He often swam to his aunt’s house, and he often got a cramp in his leg,” she told the Gazette.

Mrs Nongyao fainted with despair as the rescue workers pulled her son’s body from the water, while his younger brother wept.

Mr Weeranan had been drafted into the Royal Thai Army and was scheduled to report for induction on May 1.