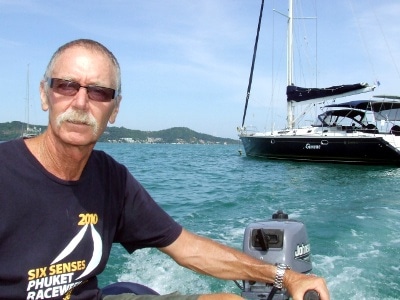 PHUKET: A 20,000-baht reward is being offered but Phuket police are still at a loss as to who is committing the thefts from yachts anchored in Chalong Bay.

An estimated 12 yachts have been broken into in the past month, with one yacht – the 20-million-baht S/Y Smoke – having suffered a reported US$6,000 in equipment losses.

Roger Harris, the 61-year-old Australian owner of S/Y Simone, is offering a reward of 20,000 baht for any information that leads to the arrest of the culprits and the return of his stolen items.

“I came back from Australia about two weeks ago to learn that my boat was broken into. They damaged the door to gain entry,” he said.

“They just took equipment that could be removed from the boat, such as GPS navigation units and television sets,” he explained.

While Mr Harris was in Australia, his wife checked on the boat every two weeks, he said.

“People keep watch on their boats all the time, but the thieves probably came during the night while the owners were not on board,” he said.

Mr Harris reported the theft to Chalong Police Duty Officer Lt Atthawat Suwannarat on April 11, but says he has heard nothing since.

“I have inspected the boats with other officers and it’s currently under investigation,” Lt Atthawat told the Gazette yesterday.

“It’s hard to find the thieves as the boats were anchored in the bay, which means it was dark and there were no witnesses.

“However, we would like more information to help our investigation. Anyone who thinks he saw any boats being broken into should contact us immediately,” Lt Atthawat said.

Mr Harris thinks the thieves are professional. “They know how to remove things and to pick locks without causing much damage to the boats,” he said.

In the meantime, after four years of leaving his boat anchored in Chalong Bay, Mr Harris is now prepared to move it elsewhere.

“It’s free to anchor in Chalong Bay, but it’s not safe anymore, so I will take my boat to Yacht Haven Marina, which costs 25,000 baht a month. That’s still cheaper than hiring someone to watch the boat for me for 10,000 baht a week,” he said.