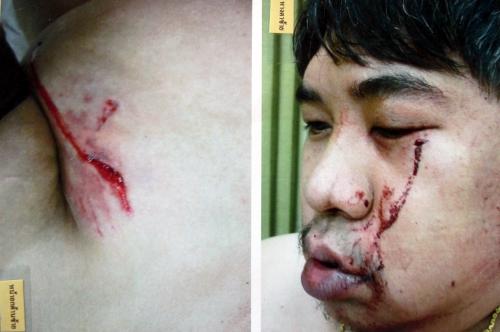 PHUKET: Criminal negligence charges were filed this week against the owners of the three pit bull terriers that mauled a man outside his own Phuket home in early February.

Tiansak Aikpaiboon, 33, was savaged by three of his neighbor’s five pit bulls right in front of his home in Suan Thai Village, behind Wichit Songkram School near Central Festival, at about 8am on February 6 (story here).

“My son heard a woman screaming in front of our house. He went to see what was going on and saw a woman trying to fight off the three dogs with her handbag and umbrella,” Benjarat Aikpaiboon said.

Her son rushed out of the home to help the woman, only to have the three dogs turn and attack him, she added.

Mr Tiansak was taken to Bangkok Hospital Phuket for treatment after a neighbor managed to chase off the dogs.

“He was at Bangkok Hospital Phuket for almost three weeks,” Mrs Benjarat told the Phuket Gazette.

“He was transferred to Phuket International Hospital on Wednesday to receive a skin graft to repair his leg wounds,” she said.

“We tried to negotiate with the neighbor at the police station after the incident,” Mrs Benjarat said at the time of filing the complaint.

“Initially, the dogs’ owners asked us to transfer Tiansak to the Phuket Provincial Administration Organization Hospital [in Rassada], but I declined. Our hospital bill from Bangkok Hospital Phuket reached 800,000 baht, but the dogs’ owners have paid only 300,000 baht and has refused to cover the rest of the bill,” she said.

Police confirmed to the Phuket Gazette that the dogs’ owners now face criminal charges as Mrs Benjarat filed two complaints under the Criminal Code: one under Section 300, causing grievous bodily harm through negligence, and another under Section 377, allowing a ferocious or vicious animal to wander alone in a manner likely to cause injury.

“If they [the dogs’ owners] are found to have been negligent, the case will be filed with the Public Prosecutor,” said Officer Sanich Nookong of the Wichit Police.