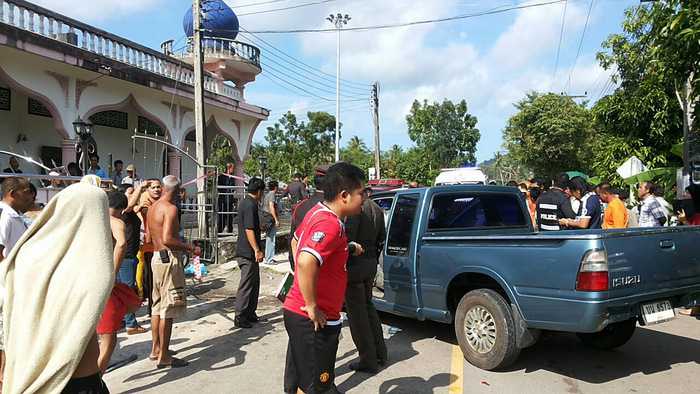 PHUKET: Police arrested four armed men after the suspects crashed into the front gates of a mosque in central Phuket while attempting to dodge a police checkpoint this morning.

Police began their pursuit of the Isuzu pickup truck, bearing Trang license plates, after witnessing it turning around in order to avoid a checkpoint in Thalang at about 9am.

“While we were in pursuit, they tried ramming us,” said Lt Suchart Leucha of the Thalang Police. “We both lost control of our vehicles. The truck crashed into the gates in front of the mosque.”

Police seized a pump-action shotgun, a handgun with five bullets and about 100 grams of ya ice (crystal methamphetamine) found in the truck, said Phuket Provincial Police Deputy Commander Arayapan Pukbuakao at a press conference held just before midday.

“We have yet to press charges as we are are still conducting our investigation,” Col Arayapan said.

One bystander narrowly escaped injury during the chase.

Nuliam Kaenphet saw the police chase in action, quickly parked her motorbike in front of the mosque and ran inside.

“Less than a minute later, the pickup crashed into the gates – and my motorbike,” Ms Nuliam told the Phuket Gazette.

Another motorbike parked in front of the mosque was also damaged in the crash.