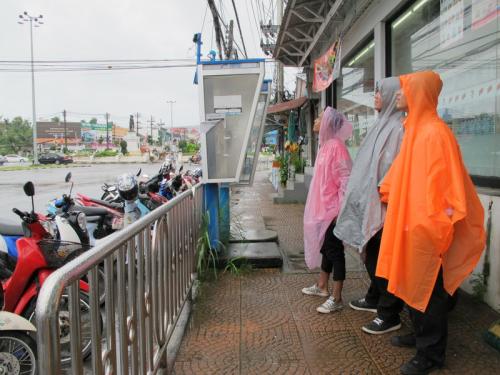 PHUKET: More rain is forecast for the coming days as Phuket suffers heavy deluges causing minor flooding at locations across the island.

More than 68mm of rainfall was recorded at Phuket International Airport yesterday and 56mm fell on Phuket Town, with both locales recording more than 25mm within a three-hour period.

On Tuesday night the water was up to 50cm deep. Guards stopped residents from driving down some of the interior roads, where whole parking areas were underwater and could not be used.

“When it floods, I can’t park near my building,” said Montonn Songnuan, another resident. “I have to carry my uniform to my car and then change in my car,” he said.

“I heard that the stream that flows through the estate is not deep enough. When it rains, water flows down the hills behind the estate and into the stream, causing it to overflow,” he said.

“We’ve complained about this problem to the people in charge but nothing has happened. We need help,” said one resident who declined to be named.

“The problem is getting worse,” she added.