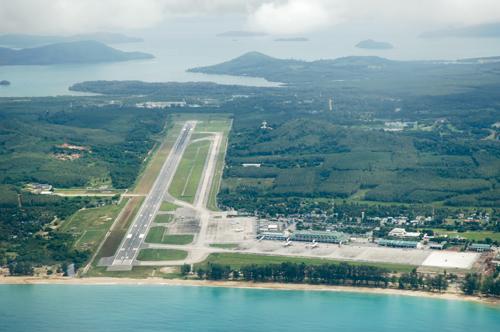 PHUKET: The Airport Authority of Thailand (AoT) has accelerated the construction of a temporary terminal building at Phuket International Airport (HKT) in order to ease passenger overload ahead of the next tourism high season.

Quoted in a recent report by BangkokBizNews, AoT Board Director Sitha Tiwaree announced that the construction schedule for the temporary terminal had been tightened due to increased over-crowding at the airport in anticipation for the next high season, which begins around October-November.

As part of the first and second of four phases for the 5.8 billion baht expansion project, the temporary terminal building and five of the 10 planned aircraft bays should be operational by September, which would bring the total to 20 by the year’s end, the director confirmed.

When completed, the terminal will be able to accommodate an increased number of passengers, while also increasing profits for AoT.

Phuket Airport was factored into plans as a regional aviation hub in May last year.
Video: Phuket Today

The new temporary terminal is expected to help the airport increase its income by up to 30%. This would see the airport’s annual income rise from about 1.8 billion baht, up to 2.4bn baht.

In a recent update by the Gazette, entitled Head of airport expects arrivals to exceed 10.5mn (published in the Gazette business section online on April 29), Phuket International Airport Director Prathuang Sornkham said that profit in 2012 rose to 1.85bn baht, up 300mn baht from 2011.

He also said that he expects profit to be around 2bn baht by the end of 2013, most of which will be generated by passengers and airlines.

Mr Prathuang explained that such profit derives from rental fees and taxes paid by airlines and other retailers based at the airport, but does not factor in the spending or expenditures of tourists once they leave the airport.

Also quoted in the Bangkok-BizNews update, AoT Acting Director Pongsak Semson said: “The temporary terminal will be built on one floor [sized] between 4,000 to 5,000 square meters and located near the airport electricity [power] station.

“There will also be added check-in counters and two areas of about 1,000 sqm for use as office space by AOT. Once the second phase is complete, the five aircraft bays will be ready to handle more passengers in the high season.”

In total, the project will cost about 5.791bn baht and is expected to be completed in 2015.

Despite multiple attempts by the Gazette to get confirmation from AoT about the expansion project’s progress, Mr Prathuang was unavailable for comment.

However, the Gazette was able to contact a reliable source inside Sino-Thai Engineering and Construction Public Company Limited, the main contractor for the expansion project, who confirmed that construction of a temporary terminal is underway, and that overall progress is on schedule for the target completion of 2015.

The source outlined the expansion project’s phases as follows:

1. Expanding the runways and taxiways; adding 10 new aircraft bays bringing the total to 25 by 2015.

4. Building a new elevated departures/drop-off road in front of the international and domestic terminals as well as roads for passenger arrivals and and other passenger transit roads around the airport.

How to legally own Thai land