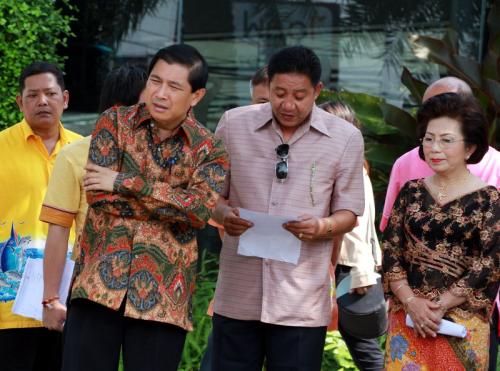 PHUKET: Phuket Governor Maitri Inthsut paid a visit to the behind-schedule Klong Bang Yai project, which, if incomplete by the coming rainy season, threatens Phuket Town with another round of serious flooding.

“The klong is the main waterway draining water from Kathu to Saphan Hin. If it is not finished before the heavy rains start, homes and businesses in the heart of Phuket City could be damaged by more flooding,” Governor Maitri said.

The klong renovation project was due to be completed by December 28, 2012 at a cost of 21 million baht (story here).

However, the acquisition of some property needed to expand the klong took longer than expected and the amount of damage to the retaining walls from last year’s floods was worse than originally estimated, the construction company reportedly told Gov Maitri.

“Because they broke the contract by missing the deadline, they must be fined as is stipulated in the contract,” Gov Maitri said.

“The work must be done as soon as possible,” he added.

In addition to taking note of the delayed work, Gov Maitri said he was on site to gather suggestions from locals about how to handle other flooding issues in Phuket Town.