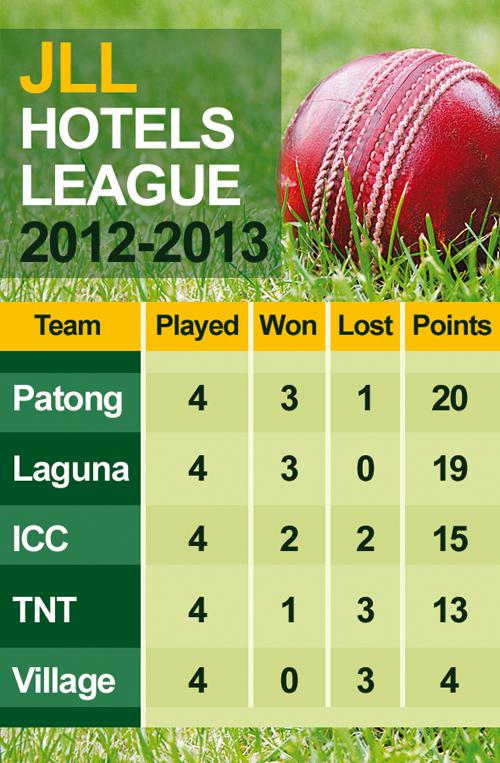 PHUKET: In the final match of the first round, and one of the most highly anticipated matches so far this season, Jabudays took on the undefeated Laguna at the Alan Cooke Ground (ACG) on last Sunday.

Many thought this match might see the Laguna side capitulate to a very strong Jabudays side, the only side to defeat them in 2012. The match lived up to expectations, with the result only decided in the final over, when Jabudays were bowled out for 197 just short of the 206 run target set by Laguna.

With the ACG outfield looking in pristine condition, Laguna had no hesitation in electing to bat after winning the toss. However, all did not go according to plan early on, with opener Andrew Cole run out in the 2nd over followed shortly thereafter by Sameer Khan who was caught at deep mid-on in the 4th over.

With two wickets down for only 11 runs, the Laguna side looked in an uncomfortable position. However, Bill Stahmer (76) and Stuart Reading steadied the ship to hold out a very accurate Jabudays attack going back to the clubhouse at the 10-over drinks break with just 36 runs on the scoreboard. Upon returning, they managed to push the run rate along until their 64-run partnership came to an end when Reading was bowled in the 18th over with the score on 75.

At the 20-over drinks break, Laguna were 4 wickets down for 94 runs. Meanwhile, Stahmer, the league’s oldest player, continued on with gritty determination and a string of handy partnerships until he was finally dismissed in the 32nd over with Laguna 9 wickets down for 181 runs.

Jabudays had their tails up and were looking to bowl out Laguna for less than 200 runs. However, Darren Shaw and Shah Ullah put on an undefeated last wicket stand to take the score to 9 wickets for 205 runs at the end of 35 overs. Pick of the bowlers for Jabudays were Anand Chand (1 for 8) and Naeem Ul Haq (1 for 30).

Jabudays took to the field after the lunch break feeling confident they could chase down the Laguna score. However, they too suffered an early loss when captain Anand Chand was caught at backward square leg in the 4th over with only 8 runs on the scoreboard. Imtiyaz Mushtaq (58) and Deepak Mehra (28) took the attack to Laguna returning to the clubhouse with 1 wicket down for 60 runs at the 10- over drinks break, well ahead of the Laguna run rate.

Laguna then introduced their slower bowlers, which slowed the run rate, but they were in desperate need of a breakthrough if they were to have a chance of winning the match. They eventually broke the 86-run partnership when Meehra was dismissed in the 19th over with the score on 94 runs.

At the 20-over drinks break, Jabudays were only two wickets down for 103 runs and Mushtaq was looking in formidable form. Laguna knew they had to pick-up wickets to stem the run flow. They achieved immediate success with a wicket in the 21st over, followed by the prized scalps of Mushtaq and Ali Khan in the 22nd over.

S Nawez (33) and Surender Kumar put on a 37-run partnership until Kumar was dismissed by a sharp catch by Stuart Reading at backward point with the score on 143 in the 27th over. Val Guiraud then claimed the scalp of Nawez in the 29th over and was on a hat-trick after bowling Balesh Desai for a golden duck. At 8 wickets down for 164 at the 30 over mark, and with 42 runs to claim victory from 30 balls, it was still anyone’s game.

Vikram Sharma and Paresh Bokari put on a valuable 35-run partnership taking the score to within reach of the target, until a match winning run-out by Shoeib Mushtaq with a direct hit from deep mid-wicket with the score on 191 in the 33rd over.

With 15 runs required from 12 balls, the balance had tilted towards a Laguna victory but it was not until the last Jabudays dismissal in the final over before the outcome could be certain. Jabudays were eventually bowled out for 197 runs, just nine short of their target. Pick of the bowlers for Laguna were Val Guiraud (3 for 44), Sami Ullha (3 for 48) and Shoeib Mushtaq (2 for 21).