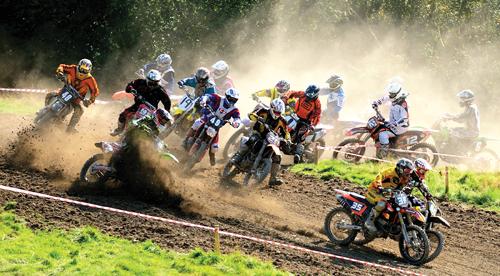 BANGKOK (The Nation): Thailand’s best bikers will go up against the global elite for the first time when the 2013 FIM (Fédération Internationale de Motocyclisme) Motocross World Championship Grand Prix of Thailand makes its debut in the Kingdom in March.

The race weekend will be hosted at the Pinthong Industrial Estate 3 track in Chon Buri from March 8 to 10, drawing global attention and an expected windfall of hundreds of thousands of baht.

Thai riders will compete in a national meet to determine the 12 wild cards for the grand prix.

Ahead of their debut in the competition, Thai riders will get guidance on techniques and tactics from Dutchman Jan Postema, a former world motocross champion.

The race is one of 18 stops in Europe, South America and Asia on the motocross World Championship calendar.

The Motocross World Championship Grand Prix of Thailand will be televised live to more than 100 million households in over 120 countries.

Man Utd and Chelsea heading to Bangkok
PHUKET: Manchester United will visit Bangkok from July 11-13 and Chelsea will spend a week in the capital from July 12-18.

“This will be the first time two English Premier teams visit Bangkok at the same time,” said Jaturon, who added that United’s full schedule for the Thailand trip would be announced in the coming weeks.

Chelsea’s schedule will include a match against a Singha Thailand Allstar XI in the Singha Cup, on Wednesday July 17 at the Rajamanagala National Stadium, Bangkok.Chelsea’s visit to Bangkok is part of their “2013 Here to Play, Here to Stay” tour of Asia, taking in Thailand, Malaysia and Indonesia.

Chelsea will engage in several activities during their week-long trip, including a soccer clinic at Bangkok’s Super Kick stadium, charity work and a sightseeing cruise along the Chao Praya River.

“They will train in more than one stadium, with some sessions open to the public. They will also visit Siriraj Hospital to offer their well-wishes to His Majesty the King,” said Jaturon.

Some 100 rooms at Bangkok’s Shangri-La Hotel are already reserved for some 60 players and staff, with Jaturon confirming that first-team players are expected to make the trip “unless they are committed to big games or are injured”.

Jaturon dangled another enticing prospect for local fans, saying that Arsenal, Liverpool and Spurs could be visiting Thailand in the near future thanks to Singha’s alliance with new EPL sponsor, Carlsberg.

The event, to be held between November 1 and 10 at Hua Mark Indoor Stadium and Nimibutr Stadium in Bangkok was initiated by Football Association of Thailand (FAT) President Worawi Makudi.

The capital’s 12,000-seat Indoor Futsal Arena in Bangkok, which was built at a cost of 1.3 billion baht primarily for last November’s Futsal World Cup, failed to host a single game as it didn’t meet FIFA’s safety standards for the event, and is not on the list of host venues for the Continental Cup.

Eight teams will be divided into two groups of four each for the cross-over semi-finals and then on to the final.

“We will stage the AFF Futsal Championship in October at the Hua Mark Indoor Stadium and Nimibutr Stadium before the Continental Cup. It’ll be a dress rehearsal for our team before the big event, which we intend to stage every year,” said Worawi.

Also joining the impressive line up are Japanese legend Shingo Katayama and Kim Kyung-tae – the rising star of Korean golf.

“There is no question that this year’s Thailand Open features one of its strongest ever fields. This will be the first time Padraig Harrington will play in our national Open and we are thrilled that he has taken time out of his busy schedule to join our event,” said Rungsrid Luxitanonda, on behalf of the Thailand Golf Association (TGA) and Singha Corporation.

“Our national Open has made remarkable progress since it returned to the golf calendar in 2009 after a brief hiatus. The tournament has reemerged as one of the region’s premier national Opens, particularly with it now being jointly sanctioned by the JGTO,” added Rungsrid.