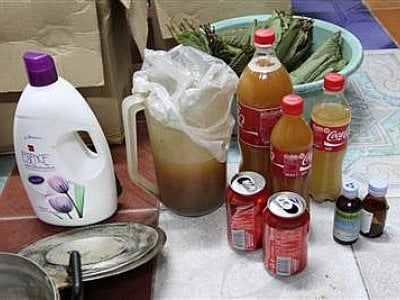 PHUKET: Schoolkids in Phuket are taking pharmaceutical drugs after ya ice (crystal methamphetamine) smoking sessions in an attempt to turn up negative in urine tests for the drug, local officials have revealed

The statement follows a recent round-up of 19 truant school children in secondary schools, 15 of whom tested positive for ya bah (methamphetamine pills).

Mr Supachai said the drug of choice among the children was ya ice (crystal methamphetamine), typically bought from suppliers in Patong, on the west coast of Phuket.

Some of the youths caught using the drug recently confessed to taking an unspecified “kidney cleaning” pharmaceutical drug in order to test negative if forced to provide urine samples.

The youths said the drug also causes them to vomit. A sample of the drug provided by one youth was sent for analysis, he said.

Officials in Phuket use a “meth cassette” test kit in conducting urine tests. If the urine turns telltale purple, the test is considered positive, although the results need to be verified by more accurate blood testing.

Meanwhile, Muang District drug suppression officers coordinated with the headman of Rassada sub-district Village 2 to raid a group of youths in a small shack in the Bang Chee Lao Community yesterday.

The community, built on reclaimed mangrove forest, is home to many transplants from the three Deep South provinces of Yala, Pattani and Narathiwat, where the “4 x 100” drug cocktail is popular.

Four youths were found in possession of leaves of the krathom tree, which is native to the region. The leaves, which act as a mild stimulant, are restricted as a Category 5 drug.

The boiled leaves are the key ingredient used to make the “4 x 100” cocktail. Other ingredients include cola, cough syrup and, in some cases, ground up mosquito repellant coils.