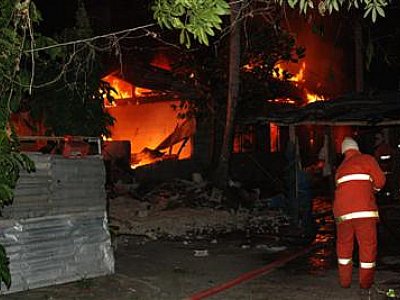 PHUKET: A large fired completely destroyed a home and a row of rental flats in Phuket last night.

Thung Thong Police were notified of a blaze on Soi Bangthong, about 50 meters from the Family Mart convenience store on Phra Barami Road on the Kathu side of Patong Hill, at about 8pm.

Arriving at the scene, duty officer Capt Sakchai Choonyong and fellow officers found one house and a nearby row of eight single-story flats in flames.

It took 20 firefighters and five fire engines about 40 minutes to finally extinguish the flames, but not before the home and flats were completely gutted.

Twelve officers and three trucks from the Patong Municipality Fire Station joined counterparts from Kathu Municipality in the operation.

The owner of the properties was identified as Suchada Thianthoobdaeng.

There were no injuries, in large part because the flats were rented out to people who had already left for night work in Patong.

Investigators will today begin sifting through the charred remains of the dwellings to figure out what caused the fire, which appears to have started in the first flat in the row of eight.