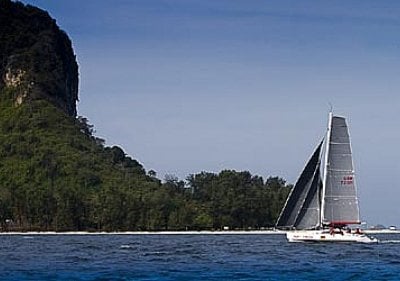 PHUKET: Day Four of The Bay Regatta saw sailors greeted with sunny skies and good wind as they left their anchorage off the Sheraton Krabi Beach Resort and headed back to Ao Chalong for the regatta’s final party and awards ceremony at the Ao Chalong Yacht Club (ACYC). The colourful spinnakers stood out proud as the fleet made the crossing from Krabi to southern Phuket.

Impressive course designs weaving through the stunning scenery and karst topography of Phang Nga Bay, combined with the fantastic parties, made this year’s regatta another great success.

With two first-place finishes and two in second place, Russian Arbuzov Andrev’s Ruby Tuesday captured the five-boat Racing Class with six points. Fellow countryman Nikiforov Evgenii’s Gastion came second on the strength of two seconds, a first and a third totalling eight points. And though Scott Duncanson’s Quantum Fusion flew through the water yesterday, winning with a day’s best of 2:06:53, its three third-place finishes in earlier races relegated it to third overall in the Racing Class.

In the nine-boat Cruising A class, Neils Degenkolw’s Phoenix took top honors on the strength of three first-place finishes and one second-spot placing, finishing with five points overall, the best score in the regatta. Jim Ellis’ Remington came second with eight points overall on one first, one second, and two third-place finishes. And Richard Macfarlane’s Aida claimed third spot with eleven points, on three thirds and a second. Degenkolw’s win gave him seven Bay Regatta victories, placing him one behind Mark Pescott for the overall Bay Regatta win total.

Gavin Welman’s Rascal and Kevin Perran’s Rusalka tied for points with eleven each in the eight-boat Cruising B class. But Rascal won on countback finishing with two firsts, a fourth and a fifth. Rusalka had two seconds, a third and fourth place finish. Charlie Preen’s Seventh Heaven took third overall with thirteen points based on two fifths, a second and a first.

The seven-boat Bareboat Charter division saw Kochnev Petr’s Tonicola 2 and Kozub Sergey’s Creme Brulee (aka Venture) tied with six points each as both had two first and two second-place finishes, but Tonicola 2 won on countback. Paul Kendall’s Anchali was third overall with 14 points based on three thirds and a fifth-place finish.

Though the wind didn’t always blow true, the beauty of Phang Nga Bay and its stunning karsts makes any old sea dog a little less fierce as they gaze out to the stunning limestone cliffs surrounding them.

The Bay Regatta is a non-profit event. Thanks to the support of sponsorship, the Regatta can continue to provide varied and interesting race courses through some of the most breathtaking maritime scenery in the world, to reach unparalleled anchorages and party venues – all factors which contribute to this exciting event that keeps participants coming back every year.

The Bay Regatta is sponsored by the Phuket Gazette and its television arm, PGTV.

Phuket’s War on Drugs: Why has Bebe gone?