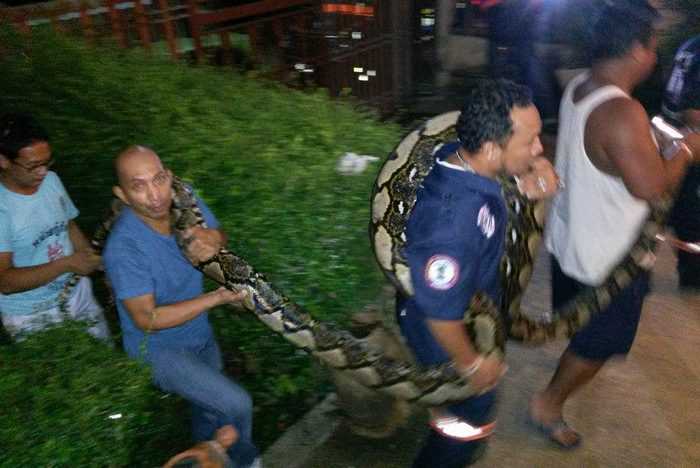 PHUKET: Rescue workers wrangled a six-meter-long python out from under a Phuket home owner’s house early this morning.

“It took us about two hours to remove the snake. It was absolutely huge. Weighing about 80kg, it was by far the biggest snake we’ve caught in the past 10 years,” said Sayan Thammapan, Ruamjai Rescue Foundation team leader.

“When we received the report just after midnight, we had no idea how big it would be, so it was only me and a co-worker who showed up. Once we grasped the situation, I called in backup.”

The python had taken over the crawl space under the home in the Baan Maneekram housing estate in Chalong, forcing the rescue workers to crawl in after it.

“We had to catch it from a sitting position. Finally, I was able to get the rope loop around its head and we were able to pull it out,” Mr Sayan told the Phuket Gazette.

The enormous snake was released at the Khao Phra Thaew Wildlife Sanctuary in Thalang.