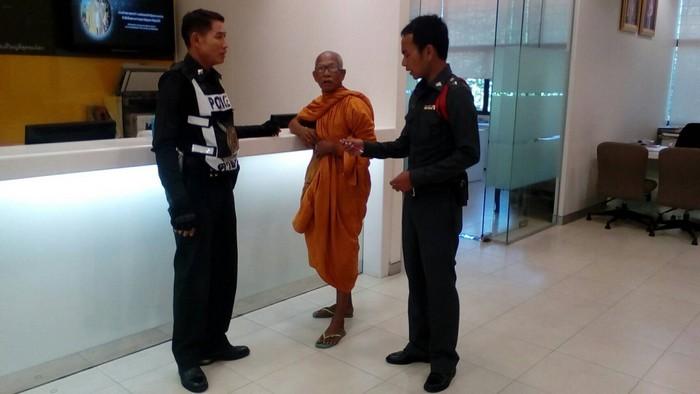 PHUKET: An elderly Buddhist monk baffled Krungsri Bank staff this morning at a branch on Thepkrasattri Road when he insisted on withdrawing 20,000 baht from his account – an amount he had withdrawn the previous day.

A security guard at the bank called in ‘reinforcements’ from Phuket City Police to handle the precarious situation that ensued, as the monk dropped to his knees and began begging the staff for his money.

“The bank statements of 62-year-old Phra Weera showed that he had already withdrawn 20,000 in cash the day before,” confirmed Lt Chatree Wetrangsri of Phuket City Police. “Today, however, he had 1,091 baht in his account and was trying to withdraw much more.”

“The monk insisted that he wouldn’t leave the bank until he got his money.”

Police then took Phra Weera to Buddhamongkolnimit Temple to see the abbot there, who is also the dean for Phuket City. However, he was unavailable.

“We learned later that Phra Weera is, in fact, a forgetful monk, and he eventually remembered his previous day’s withdrawal. We dropped him off at the bus station as he wanted to go to Trang Province. Before we left, he extended his apologies to the bank staff.