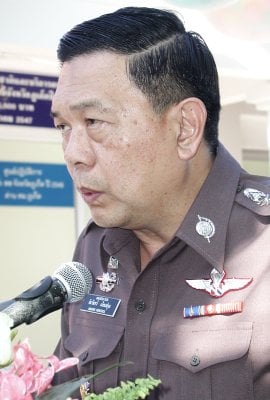 Phuket Immigration Superintendent Pol Col Witawat Buranasompop said the building will be used by officers who will monitor the movements of foreigners in Phuket.

He said more and more foreigners are coming to Phuket, either as tourists or for business. “Unfortunately, some foreigners come here to commit crimes, and we need to have a center for international crime checking to monitor such things in Phuket.”

Pol Lt Gen Amarin Niemskul, Commissioner of the Immigration Bureau for the Royal Thai Police, accepted the building, which is in the grounds of the Marine Vehicles Check-in Division and the Investigation and Suppression Division of Phuket Immigration.

He told those present, “To hold information on foreigners is very important for immigration tasks, but it also makes foreign visitors who are here legitimately, for holidays or work, feel more confident.”

Gen Amarin said that, as the number of tourists coming to Phuket increased, so would the chances of international criminals heading for the island, and one of the duties of the Immigration Office was to prevent crime.

He continued, “Fortunately, Thailand has no great enemy, so we don’t have terrorists in our country.”

Gen Amarin added that information held by Immigration could be linked to data held by other agencies around the world, including the authorities in the United States, while officers at Phuket International Airport can now share information on-line with colleagues at the international airports in Bangkok and Chiang Mai.

By the end of 2006, the service should also be able to access information from Interpol about suspect foreigners, and pass this on to every immigration checkpoint in the country, he said.

As an aside, Gen Amarin added that labourers from Burma who are registered to work in Thailand but have lost their jobs because of the tsunami will be able to stay in Thailand until June this year.