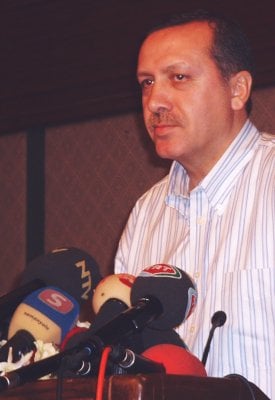 PHUKET: Turkish Prime Minister Recep Tayyip Erdogan, on a visit to Phuket, offered Turkey’s help in the effort to protect the countries around the Andaman Sea from future tsunamis.

Mr Erdogan was speaking yesterday at the Sheraton Grande Laguna Phuket, after a helicopter tour of tsunami-affected areas in Phuket and Phang Nga, accompanied by Thai Interior Minister Bhokin Bhalakula.

Mr Erdogan, whose own country was rocked by two major earthquakes within three months in 1999, resulting in around 18,000 deaths and damage amounting to millions of dollars, extended his sympathy to the Thai people.

He continued, “Turkey already has experience with earthquakes and we are ready to join with other countries in this region to look for ways of preventing this problem [tsunamis] in the future.

“Turkey already has high-tech equipment, of the kind that could be installed in this region as part of a tsunami early warning system.”

However, Mr Erdogan advised tsunami-hit countries to concentrate on the early warning system only after they had solved “basic problems” such as a wrecked schools, orphaned children and shattered infrastructures.

Turkey has donated US$125,000 (5 million baht) to the Thai tsunami relief effort and three crates of medical supplies to the Thai Red Cross Society.

Mr Erdogan arrived in Thailand after visiting Indonesia – where he also offered Turkey’s help in setting up an early warning system – and Malaysia. He was due to visit The Maldives and Sri Lanka today and tomorrow.

During his visit to Thailand, Mr Erdogan also met with his Thai counterpart, Thaksin Shinawatra, and discussed the development of closer economic and trading ties between the two countries.

Monitoring of foreigners gets a boost