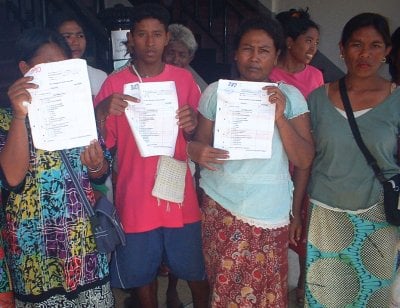 PHUKET: More than 50 sea gypsies from Rawai rallied outside the offices of Phuket Governor Udomsak Usawarangkura this morning to protest at what they say is a lack of help from the government since the tsunami.

The government has said it would make one-off payments of 2,000 baht to anyone who lost his or her job because of the tsunami. But sea gypsy Kwanjit Bangjark said she has not received a single satang from the government so far.

“I wanted to work in the programme for jobless people, which pays 175 baht per day, but the officers told me that if I entered the programme, I wouldn’t receive 2,000 baht. But one month on, I haven’t received either,” she said.

Tiya Buathong claimed that the only people who have been helped are those who are “close” to government officers. She said she needed money to help pay for her nephew to attend school.

K. Tiya claimed that when she went to claim her cash on January 7, officers told her all the money had been already been given away, and that she must wait for more to come through. A month later, she is still waiting, having been passed from Tambon Administration Organisation (OrBorTor) officers to the Governor’s office and back.

Other villagers conceded they had received dried food, rice and 200-300 baht from the government since the disaster, but, they said, it isn’t enough for them and their families.

Suthep Thertkietkajorn, of Phuket Labour Office (PLO), denied that the government was doing nothing to help the sea gypsies, pointing out that 116 million has already been paid out to the jobless nationally, with 26 million baht of this coming to Phuket.

K. Suthep said the PLO, working with local organisations, had found jobs for 700 people and had paid them 175 baht a day. The work had had to stop because of the election, but now that was over, the workers would be re-hired from February 11.

However, Aroon Soros, the Chairman of Rawai OrBorTor said he could do little to help the protestors until he received extra money from the government.

“The money allocated to Rawai has already been given away,” he explained. “I have asked the province for more money, but it hasn’t arrived yet because the government hasn’t approved the budget.

“I’ve tried to tell people they should be patient and wait for this money, but some of them don’t understand.”

K. Aroon said it was thought that the OrBorTor could find 40-50 days of work for people who are genuinely unemployed. Most of these would be sea gypsies.

“The OrBorTor has many projects for them, such as cleaning the beaches,” he said. “If the government would give us the money, we could put them to work immediately.”

Monitoring of foreigners gets a boost