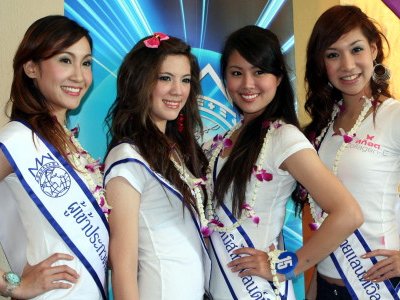 PHUKET: Thirty Miss Thailand World 2010 contestants are at the Cape Panwa Hotel Phuket as part of a four-day “training camp” to prepare for the pageant, which will be televised live from Bangkok on the night of August 14.

Apart from learning everything they will need to know to succeed in the beauty competition, the contestants will also do some charity painting work at the Baan Laem Sai School.

The beauties arrived on the island yesterday for a three-night stay.

This year’s pageant promises to serve up some bombshells, as chief organizer Nawat Itsornkraisil has this year given a blanket green light for plastic surgery.

“In previous years,” he says, “the contestants were always dubious about it and kept asking, ‘Can I do this? Is this much okay?’ So we’ve now made it clear with a blanket decision: Plastic surgery is okay for this competition.”

It’s two birds downed with one stone for the organizers – they no longer have to scrutinize applicants to make sure “they’re real”, and they’re absolved from criticism in case the girls aren’t.

Purists will still object, but these days many of the world’s beauty queens – including those from Venezuela and India – have had tummy tucks, butt lifts and boob jobs, or at least a little facial rearrangement.

In fact, the only thing the surgeons are barred from adjusting on Miss Thailand World contestants is gender, so ladyboys (transsexuals) are still not eligible to compete.

Meanwhile, as is said every year in such pageants worldwide, the organizers claim they are putting more emphasis on the contestants’ skills and talents.

“We’d love someone who can sing different styles and speak 10 languages,” Mr Nawat says, only half-joking.

Miss Thailand World 2009 Pongchanok “View” Kunklub fit the bill with her taekwondo moves, but this year we can expect a multilingual, singing, dancing, football-playing, Nobel-winning, maternal-but-adventurous Beyond Perfect Ten.