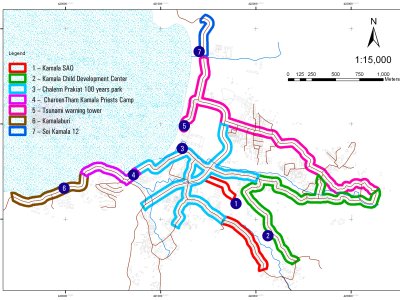 KAMALA: Residents in Kamala were informed at a public hearing on July 7 that the Environmental Impact Assessment (EIA) report needed to build a 350-million-baht battery of underground wastewater treatment facilities is now complete.

The project only needs final approval from the provincial review board and funding to move forward.

The event was held at the offices of the Kamala Tambon Administration Organization (TAO). Also attending were Kamala TAO council members and about 20 local residents.

Explaining the 1.5-million-baht EIA report was Assoc Prof Sittichai Tantanasarit, who headed up the Kasetsart University consulting team that carried out the six-month study.

The only wastewater treatment systems currently in operation in Kamala are at hotels, where they are mandated by law, the EIA report noted.

The EIA also highlighted the need for the project given the rising population in the area.

It was not explained how the tourist figure was arrived at, however.

Kamala has just 1,821 rooms in 34 accommodation establishments, according to the latest figures from the Tourism Authority of Thailand.

The actual population of Kamala is increasing 4.7% annually on average, according to the report. This was compared with the national average increase of 0.6% a year and Phuket’s current population growth of 3.4% annually.

Unlike Patong, which has one large wastewater treatment facility, the plan for the Kamala system is for seven small treatment sites, all underground.

Units are proposed at the following locations:

“This underground system does not require the OrBorTor to acquire private land and it is easier to maintain than one large system,” Dr Sittichai said.

The plan calls for all seven units to be completed within about three years from the start of construction.

Ninety percent of funding would come from either the Thai Khem Kaeng (Strong Thailand) financial stimulus package or through a loan from the Thai Environmental Corporation Foundation.

The remaining 10% would be funded by the Kamala OrBorTor.

Kamala Deputy Mayor Santi Auttasup said, “We have already applied to receive three budget allotments under Thai Khem Kaeng. The first is 350 million baht for this wastewater system. There is also 400 million baht for a water reservoir to be built on Getnee Hill and 20 million baht for improvements to Klong Naka.

“If the EIA process is finished within this fiscal budget quarter [before Sept 30], we will append it to the budget application we have already filed in order to try and get funding under this year’s budget,” he said.

Although the villagers present all agreed with the project, some voiced concern about the prospect of foul, stinking odors emanating from the treatment facilities.

To this, Dr Sittichai explained that the centers will use ‘wet scrubbers’.

“It makes only a slight smell or no smell at all,” he said.