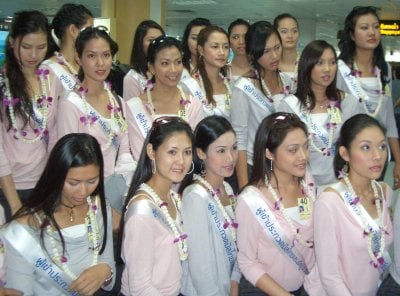 PHUKET: Forty-four beauties – all entrants in the Miss Thailand Universe 2005 contest – arrived at Phuket International Airport today at the beginning of an arduous round of photo opportunities and public appearances aimed at promoting Phuket’s wobbly tourism market.

Among the places the lovely ladies are set to visit are Wat Chalong, the Phuket Home for the Aged, Patong’s infamous Soi Bangla and – in a bizarre guns ‘n gals twist – Phuket Shooting Range.

One of the competitors, Araya “Ann” Prasompol, 19, from Rayong, told the Gazette, “I am excited because this is my first time [in Phuket]. I had heard that the island was badly affected by the tsunami but we will show the world that the beaches are still there and still beautiful.”

Thanjira “Vi” Prapaharn, 20, from Phitsanulok, said that she was very moved by the warmth of the welcome given to the competitors by the people of Phuket.

“I think that it is important for us to show the world that it is safe to travel to Phuket,” she commented.

The fab 44 will film sections of the competition – the final of which is due to be broadcast on Channel 7 at 9:30 pm on March 26 – at various beaches around the island during their seven-day stay.

For anyone interested in watching the entrants live in Phuket, they are expected to be at Karon Beach at 9 am tomorrow, Phuket Shooting Range at 9 am on March 19 and Loma Park and Soi Bangla at around 6:30 pm on March 21.