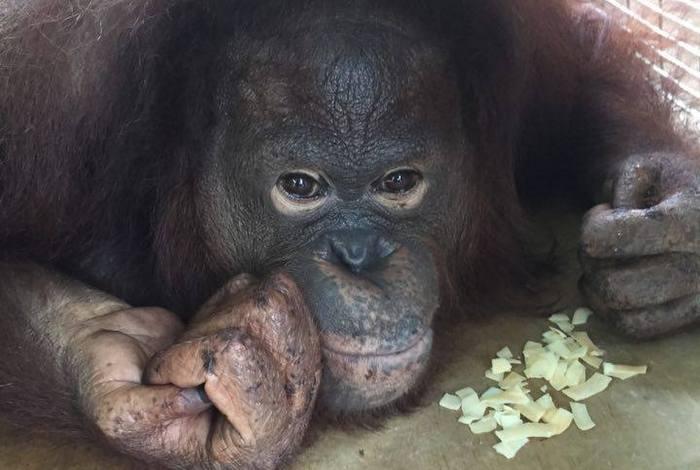 PHUKET: Milo, an orangutan recently confiscated from Phuket Zoo and moved to the Phang Nga Wildlife Nursery Station, is on the mend from a debilitating blood disorder.

“Her legs became weak, she could not walk and did not want to eat,” explained Songkrit Jearanasin, a vet at the station. “After analyzing her blood, we confirmed that she had vasculitis.”

Vasculitis, which is the inflammation of blood vessels, has numerous symptoms, including nerve issues, night sweats, fatigue, weight loss, fever and headaches. It occurs in humans, as well as other animals.

“We gave her the necessary medication and she is now recovering. However, we will do a full scan of her in Hua Hin, during the transfer to Ratcha Buri,” Dr Songkrit said.

Vicki Kiely, the local animal-rights activist who helped spearhead the push to free Milo from the Phuket Zoo, confirmed that she continues to visit the great ape in Phang Nga.

Milo, a 13-year old orangutan who for the past several years had been illegally held at the Phuket Zoo, has been rescued. Video: PGTV

“I am very impressed with the veterinary care that the DNP [National Parks, Wildlife and Plant Conservation Department] are providing for her. Of course, I’m worried, but I am hopeful that she will have a full recovery,” said Ms Kiely.

“I think that being with the other orangutans in Ratcha Buri will really help. She has been through so many extreme changes in her environment, diet and everything else.”

The 13-year-old orangutan disappeared from the Phuket Zoo ahead of a raid on the facility in February (story here). Khao Phra Thaeo Non Hunting Zone officers discovered her trapped in a locked cage, after she was allegedly released into the jungle (story here).

Milo was immediately transferred to the Phang Nga Wildlife Nursery Station, where she is being taken care of while waiting for approval from the DNP director to be moved to the Khao Prathap Chang Wildlife Sanctuary in Ratcha Buri, which already houses a number of orangutans.

She is expected to be moved there later this month.