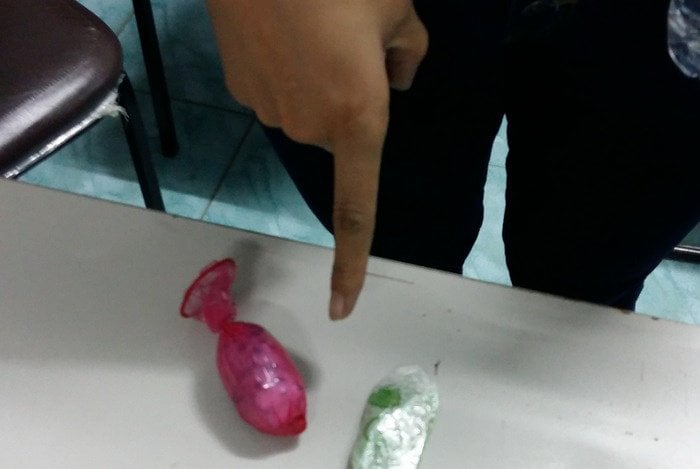 PHUKET: A woman was arrested in Phang Nga, north of Phuket, following the discovery of 760 pills of ya bah (methamphetamine) hidden inside her vagina.

“The pills were packed into three plastic bags before being nestled into two condoms and inserted into the suspect’s vagina,” Takua Pa Police Deputy Superintendent Worawit Yamaree revealed today.

The 33-year-old Laos national named by Takua Pa Police as ‘Ms Waen’, was in the midst of transporting the drugs on a bus from Bangkok when she was arrested.

“After busting a meth user, and then his local dealer, we were able to set up a sting operation,” Lt Col Worawit said.

The events that led police to the vaginal stash started with the arrest of Suksai Kokkian, who had four ya bah pills on him on Thursday. He confessed to having bought them from Chuanpit Sirisopano, 37, who was nabbed later that day.

Ms Chuanpit was in possession of 427 ya bah pills and 3.06 grams of ya ice (crystal methamphetamine), confirmed Col Worawit.

“When we searched Chuanpit’s house we found plenty of evidence connecting her to a dealer in Bangkok named ‘Uan’,” Col Worawit said. “So, we set up the sting by having Ms Chuanpit place an order. Ms Uan confirmed the order and said it would be delivered by Ms Waen.”

Police were waiting for Ms Waen at the Baan Bang Por checkpoint in Takua Pa when the bus arrived.

“Ms Waen showed us her luggage and said she didn’t have any drugs. However, we conducted a full-body cavity search and discovered the package in her vagina.

Police confiscated the packed condoms, her mobile phone, a tablet, 1,120 baht in cash and the rest of her belongings.

Ms Chuanpit and Ms Waen were both released from prison within the last year after having served time on earlier drug convictions.

A Decade Ago: The wheels on the bus go round and round