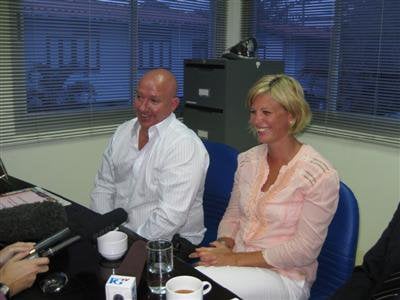 PHUKET CITY: Australian holidaymaker Annice Smoel is safely home after leaving Phuket on a Thai Airways flight to Bangkok at 9pm yesterday, then catching a connecting flight to Melbourne.

During a visit to the Phuket Immigration Office yesterday, accompanied by her husband Darren, Ms Smoel was smiling broadly in the knowledge that her departure from the ‘Land of Smiles’ was imminent.

Asked why she was grinning, the Australian mother of four told the media it was because she had regained her sense of hope – and was enjoying her first cup of tea of the day.

To questions of whether she felt any regret about the episode that left her stuck in Thailand without a passport after spending two nights in a jail cell, she simply said, “nobody intended for it to be this bad”.

Her two-year prison sentence, reduced to a one-year suspended sentence based on her confession, meant she would have to go through “special channels” if she wished to return to Thailand someday.