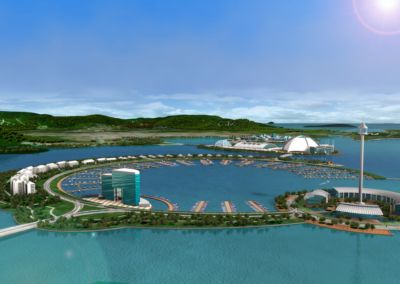 PHUKET: Funds for Phuket’s long-awaited convention center are to be included in next year’s budget, according to Phuket MP Tossaporn Thepabutr. If the budget is approved, the center could be finished within three years.

The convention center has been on the drawing boards for well over a decade. The center was initially proposed to be built on reclaimed land off Saphan Hin in Phuket City, but disagreements over whether that was the optimal location and political factors have kept the project from becoming a reality.

In October 2007, a provincial government committee finally decided on a 350-rai plot of land in Mai Khao that would allow the project to go forward without incurring land costs because the site falls under the Treasury Department’s State Property Management and Service Office, (or Ratchapassadu).

In July last year, however, the Ratchapassadu said it had allocated a 150-rai plot of land at Tah Chat Chai for the project.

Mr Tossaporn has said the proposed 150-rai area should be doubled in order to surround the center with green areas that would make the facility more attractive.

In January, the MP said that he expects a government budget of between 200 and 300-million baht to be made available in 2010 for a feasibility and environmental impact study.

Under the governorship of Niran Kalayanamit, plans to finance the building of the center with funding from ING Funds (Thailand) were drawn up, but political instability and the provisions of the public-private partnership act further delayed the project.

Mr Tossaporn is also pushing for a 17.5mn baht budget to commission new plans for a sports complex in Mai Khao, another project that has been on the drawing boards for many years.

The Phuket MP says that a businessman involved with the Singapore Formula 1 Grand Prix is interested in building the complex with private funds. Mr Tossaporn did not reveal the identity of the investor, but said that he is interested in renting the 238-rai plot earmarked for the complex and investing all of the capital himself.

The Ministry of Tourism and Sports has already spent seven million baht on a design for the complex. Mr Tossaporn, however, said that the design was too skewed toward tennis and the space could be better used.

“Personally, I’m looking to put the space inside the complex to better use than in the original design. We have to use the complex to answer all the problems we have in promoting sports tourism,” Mr Tossaporn said.

To be worth the land and investment, the complex would have to be able to attract athletes, sports scientists and trainers from around the world, he said.

Mr Tossaporn is pushing for the funds for the redesign to be included in the Ministry of Tourism and Sports 2010 budget.

If that is unsuccessful, he will push for it to be included in the mid-year budget, or for the funds to be allocated from the economic stimulus package, he said.

He gave no indication of the time-scale for the project.