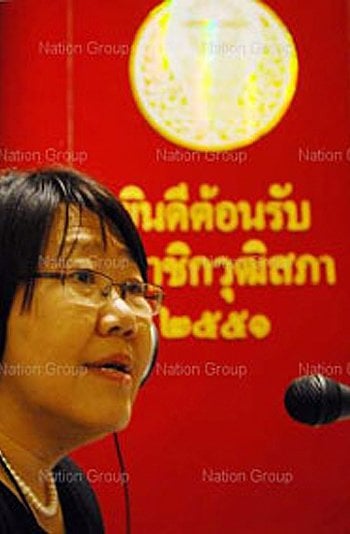 “Do we really need so many media channels? And how could we “control” a large number of media channels, anyway?” Rosana asked at a seminar entitled “How to Reform the New Media”, held by Thammasat University’s Faculty of Journalism and Communications.

“Misinformation is like toxic food that causes damage to the viewer’s brain,” Rosana said.

Adisak Limparungpattanakit, who heads the Satellite Television Association of Thailand, said it was impossible to control media content or to prevent the existence of new media.

“The lawmakers always want to control the media. However, they can never catch up with the new technology,” he said.

Unlike the senator, he saw some opportunity in that. He said the government should not only ease off on trying to control the media, but should actively help people across the country get access to it. It should also encourage outlets to produce more good content and forget about blocking “bad” content.

New media, broadly defined as comprising blogs, web boards, and cable and Internet radio and TV, have been enthusiastically received by the masses in most of the developed world. But they remain a source of ongoing consternation in Thailand where an onslaught of ‘toxic’, or ‘viral’, opinions, often presented as fact, are seen by successive governments as exacerbating the country’s social and cultural divisions.

New media appearing here in Phuket over the past two to three years include the local cable and Internet presentations of daily news from PGTV, the television arm of the Phuket Gazette, as well as the Gazette-sponsored Phuket Forum on ThaiVisa.Com, Thailands largest and most active English-language forum.