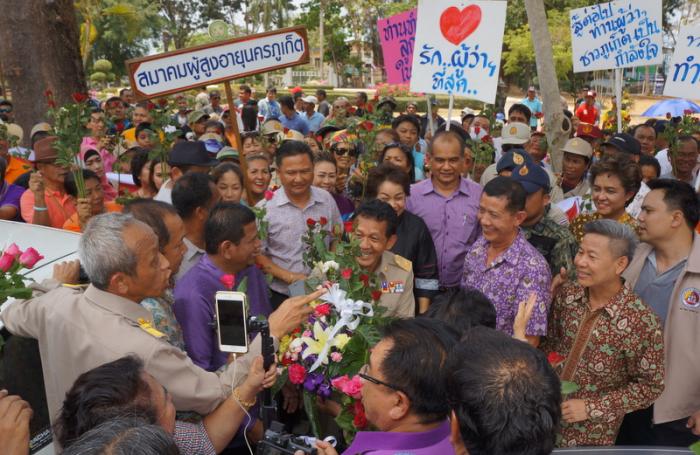 The controversy and delays surrounding the illegal business demolitions came to a head yesterday, when a local seafood restaurant at Lay Pang Beach was demolished despite a final effort by the owner to save it from being razed (story here).

“He may be a little strict, but he puts all his energy into working for our benefit,” said Akkarachai Tanlim, a supporter from Chalong. “I completely agree with the beach management campaign, as it will restore our beautiful beaches to us.”

“We have gathered here from all over the island because we want to show those who are expressing their dissatisfaction that there is an equal number of us who support this initiative,” said another supporter from Chalong.

Governor Chamroen said he was moved by the large number of supporters who turned up.

“I am extremely thankful for all the support today. I was born and raised in Phuket and I’m glad that I and other officials have a chance to give something back to our hometown,” he said. “We have been working very hard on reclaiming this land and returning it to the public. In the near future, Surin Beach will be turned into a beautiful beachfront park to honor and celebrate HM King Bhumibol Adulyadej and HM Queen Sirikit.”

The governor also noted that he was not against people expressing different points of view.

“It is okay to think differently, but everything must be done above board. If something is legal and benefits Phuket, then I have nothing against it,” Gov Chamroen said.