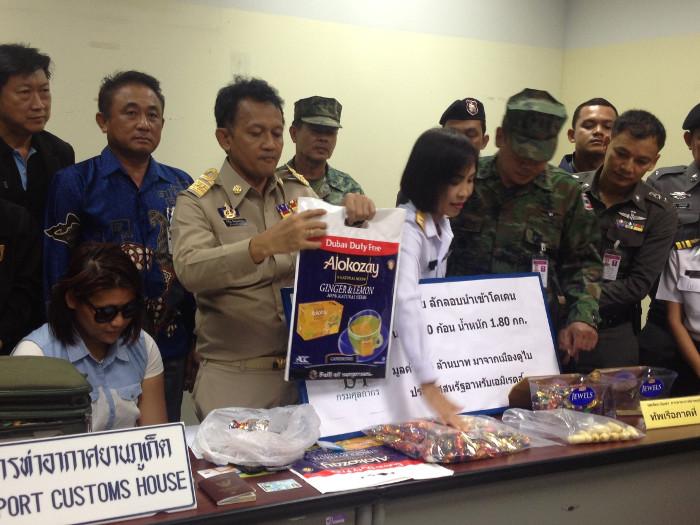 PHUKET: A 21-year-old Thai woman who attempted to smuggle 1.8 kilograms of cocaine disguised as chocolate through Phuket International Airport was arrested by customs officers this morning.

The chance discovery by officers was made at 4:15am after the woman, named as Oatchara Wikho, arrived in Phuket on a plane from Dubai.

The cocaine had been molded into pellets and disguised as candy in individual wrappers, which Ms Oatchara carried in a duty free bag from Dubai Airport.

The cocaine was estimated to have a street value of more than 5.4 million baht.

The airport’s new head of customs, Hattaya Tippayawat, who took up her post just a week ago, admitted that disguising drugs as chocolates and brazenly walking through customs with them in a carrier bag was a novel technique.

“She was just carrying the drugs in bags like she was any other passenger,” said Ms Hattaya. “And the cocaine wraps were mixed in with other wraps of real chocolate.”

“We got lucky,” admitted the customs chief. Ms Hattaya told the Phuket Gazette that another drug mule, also arriving in Thailand from Dubai, had been caught at Bangkok’s Suvarnabhumi Airport a few days ago, using the same smuggling method.

Ms Oatchara claimed not to know that she was carrying drugs.

“She said that she was hired for 150,000 baht to go Dubai and pick up something to bring back to Phuket,” Ms Hattaya said.

Ms Oatchara told the Gazette that she was hired by a man living in Bangkok, who she believed to be a Nigerian, who went by the name of ‘Michael’.

“He paid for my ticket. I didn’t know what was inside the wrappers. I have never done this before,” said Ms Oatchara.

“Michael told me to call him after I arrived in Phuket and that someone would come and pick up the stuff from me. Unfortunately, I got caught,” she said.

Customs officers had Ms Oatchara try calling ‘Michael’ but there was no answer.

Ms Oatchara was charged with possession of Category 2 drugs with intent to sell and later taken to Tah Chat Chai Police Station for further processing.

Ms Hattaya said that the pellets of cocaine appeared to have been packaged so they could be ingested by a smuggler and later excreted.

An Indonesian man was arrested in April last year at Phuket International Airport in possession of 5.2 kilograms of cocaine hidden in books. (story here).