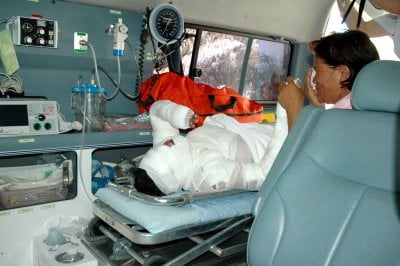 PATONG: After yelling at a Patong Beach masseuse about her crying daughter, a man doused the woman with paint thinner and set her alight about midday on Tuesday.

As the girl’s parents ran to their daughter’s aid, outraged witnesses pounced on the man and beat him.

The mother is now in hospital, critically injured with first-degree burns. Her attacker, a drug addict, will be sent to a psychiatric hospital for evaluation, police say.

Sombun is apparently well-known in the Loma Park area of Patong Beach, where he has been seen spending much of his time huffing paint thinner, bothering beach vendors and harassing foreign tourists. However, he had never before been implicated in a violent crime.

Speaking yesterday afternoon at Vachira Phuket Hospital, where her daughter Saijai, 21, is being treated for burns to 30% of her body, 49-year-old Pennee Phromdaen told the Gazette that on Tuesday her family was working as usual at Patong Beach.

K. Pennee went to escort K. Saijai’s two-year-old daughter, Sairung “Ice” Parnsang, to buy iced coffee from a nearby vendor while Saijai and her father stayed behind under the shade of an awning where they work massaging foreign tourists. While walking back to the awning, the little girl became fussy, demanding to be carried.

As her hands were already full with a bowl of noodles, K. Pennee could not carry the child. She walked back to the awning, less than 10 meters away, to ask K. Saijai to carry the crying child. Left alone, the girl started screaming. Her crying apparently agitated Sombun, who was in the area and carrying two green tea bottles full of paint thinner.

When K. Saijai went to retrieve her child, Sombun started ranting at her. Witnesses later said the man was incomprehensible. K. Saijai carried the child back to the awning before returning to argue with Sombun.

As they argued, Sombun pulled out a bottle of thinner, doused K. Saijai’s shirt with it, and set her alight with a cigarette lighter. As flames engulfed her body and she fell to the ground, Sombun picked up a metal tent stake and was about to hit her with it, but then turned and ran away, she said.

K. Pennee and her husband ran to help their daughter. They pulled off her burning shirt, but her bra continued to burn. The flames were eventually doused with water, but not before Saijai had sustained serious burns over most of the front of her upper body. The flames also burned off much of her hair and left her unconscious.

Saijai was rushed by beach guards to Patong Hospital, where she received emergency treatment. She was later transferred to Phuket International Hospital and again, for financial reasons, to Vachira Phuket Hospital. Doctors there estimate it will be at least a month before she can be released.

Holding the hand of her daughter, whose entire upper body is covered in bandages, K. Pennee told the Gazette she wants government officers to help look after the public by not allowing obviously disturbed people to threaten society.

She described her daughter, who remains unable to speak, as a friendly, hardworking girl who had followed in her own footsteps by becoming a beach masseuse. Saijai’s husband, the child’s father, is from Trang, and the whole family lives together in Chalong Village 10, K. Pennee said.

The beating administered to Sombun left him with a broken nose and covered with bruises. There were no reports of arrests relating to the beating.

During questioning, Sombun told police that he had once been employed as a teacher at Bang Neaw School, a government primary school in Phuket City, and had also once held the rank of sergeant in the Thai Army, assigned to a special forces unit.

Col Sophon noted that the contradictory and confused nature with which Sombun answered questions, and the fact that he had no evidence to back up what he said, left police skeptical.

Sombun will be sent to Suan Saranrom Hospital in Surat Thani where his mental condition will be assessed. He will be charged if deemed sane, Col Sophon said

Police to crack down on foreign labor