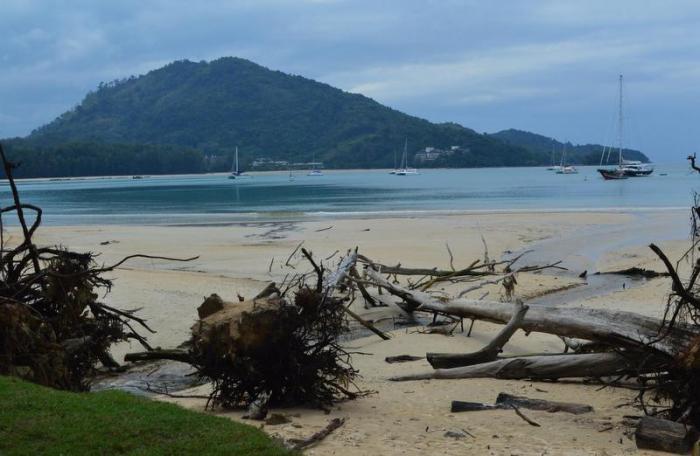 PHUKET: Officers from the Department of National Parks, Wildlife and Plant Conservation (DNP) and experts from academia have suggested two ways to counter the issue of erosion on Phuket beaches.

However, they have yet to state when will they take action, and say they are waiting for ‘help’ from local, provincial and national authorities.

On Tuesday, a team from the Marine National Park Management division of the DNP, along with marine biology specialists from Prince of Songkla University, and other relevant officials checked two of the worst affected beaches – Nai Yang and Sai Kaew.

According to satellite images, the erosion began in earnest in 2013 and grew worse over the years. Nai Yang is said to have at least 10 meters of erosion, whereas Sai Kaew Beach has eroded by up to 25 meters, with many trees falling victim to the creeping menace.

Many other beaches in Phuket, including Rawai, now face this problem as well.

“The cause of soil erosion is the death and decrease in the quantity of coral reefs. Reefs can help reduce the ferocity and speed of incoming waves, but without them, the waves cause twice as much damage and absorb even more sand,” said Ajarn Sakanan Plathong, lecturer of biological sciences at Prince of Songkla University.

Reef death can be caused by both man-made activities and natural phenomenon. Ajarn Sakanan explained that at Nai Yang, the cause is the change in direction of fresh water flowing into the sea.

“Earlier, the fresh water was flowing into Ao Thung Nun, where there are no coral reefs. Now, due to construction and swamp reclamation in that area, the fresh water has changed direction toward Nai Yang, in front of Sirinath National Park office, and effectively killed the coral reef there,” he explained.

The team has two possible suggestions to solve the issue.

“First, we need to change the direction of fresh water flow back to what it was. Secondly, we need to construct pipes for fresh water to be discharged in areas where there is no coral,” said Ajarn Sakanan.

“Building a wall to prevent beach erosion will not affect the root cause – it’s just damage control, and may even make the problem worse in areas nearby that have no wall,” he added.

“Even though we know the cause and solution, the initiative has to be taken by authorities at the local, national and provincial level,” said Mr Nattapol.

Authorities have yet to outline what action is to be taken in the matter.

“We always try our best to work on issues that affect marine life and resources. For instance, the proposed pier for airport passengers that is to be built at Nai Yang is under public hearing, but we do not condone it, as it will severely impact the natural life in the area,” Mr Nattapol added.