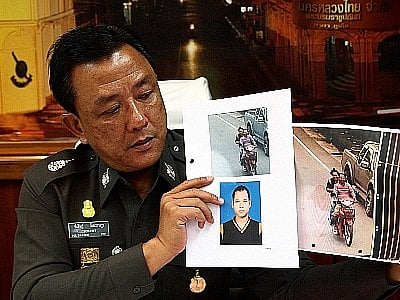 PHUKET: Police now have arrest warrants issued for the two men wanted for the robbery of a Phuket gold shop yesterday and have set up two teams of officers to track the men down.

Meanwhile, police stations throughout Southern Thailand have been alerted to be on the lookout for the suspects in their respective jurisdictions.

Maj Gen Chonasit explained that one of the thieves who robbed the Yong Chuan gold shop in Rassada is known so far only as “Mr Koson”, who also goes by his nickname “Son”.

Police have yet to confirm the man’s family name, Gen Chonasit said.

Police traced Mr Koson, a roadside food vendor, to a rented house at the Tharnthong Housing Estate in Baan Borrae in Wichit, where he lived for two years. Neighbors confirmed they had not seen him since he left the house hurriedly with his wife at about 5pm yesterday.

Witnesses reported to police that the second suspect was last seen taking a motorbike taxi to a Tesco Express convenience store on Srisuthat Road on Koh Sireh.

Gen Chonasit ordered his officers to release the images of the suspects and appealed to the public for any information that may lead to their arrest.

Any persons who believe they have any information that may help police apprehend the two suspects are urged to call 191 or Phuket City Police Station at 076-216856.

Gen Chonasit said the images of the suspects have been sent to all police stations in Region 8, which comprises the Southern Thailand provinces of Ranong, Phang Nga, Krabi, Phuket, Chumphon, Surat Thani, and Nakhon Sri Thammarat.

Capt Thada Sodarak of Phuket City Police said that the gold shop owner has reported the thieves made off with 150 bahtweight of gold (a Thai standard of one bahtweight equaling 15.1 grams of raw gold), with a total estimated value of 3.9 million baht.

The good news is that police officers have already recovered 2 bahtweight of gold, valued at about 52,200 baht, that the thieves dropped on the road during their escape, Capt Thada added.