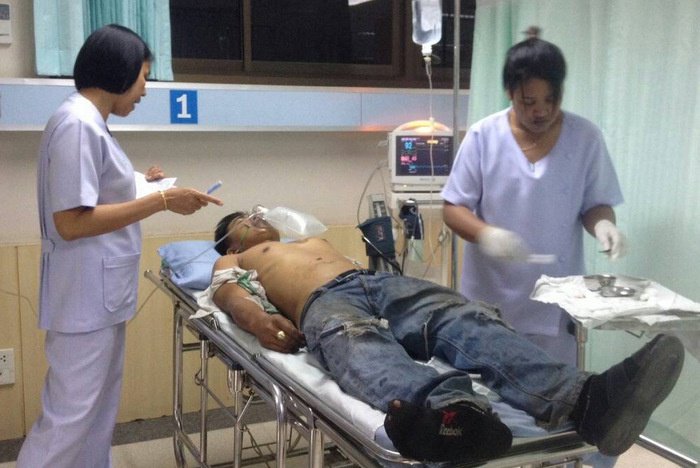 PHUKET: A man is in critical condition at Vachira Phuket Hospital after a gang of teenagers dragged him out of his pick-up truck and stabbed him in the chest within meters of the Patong Police Station early yesterday morning.

Yet, police did not learn of the attack until staffers at Patong Hospital called them at about 3:30am.

The staffers reported that Surasak Ruengpeng, 26, from Nakhon Sri Thammarat, had staggered up to the emergency room and collapsed.

He had been stabbed once in the chest with a thin, sharp object.

Lt Col Teerasak Boonsang responded to the call, and soon after his team of officers found a pick-up truck parked askew in front of the police station with the driver’s window smashed.

“Witnesses said that they saw Mr Surasak’s truck screech to a halt in front the police station, as he had tried to enter through the gate on Sainamyen Road,” said Col Teerasak.

“But it was the wrong entrance; it was closed. The main entrance is around the corner.”

The witnesses also reported seeing a group of teenagers – number unknown – ride up on more than four motorcycles.

“They smashed the window and pulled Mr Surasak out of the car,” Col Teerasak said. “They beat him to the ground, then continued to kick and punch him.

“After that, one of the teenagers pulled out a knife and stabbed him.”

The teenagers then sped off, leaving Mr Surasak to limp toward Patong Hospital, about 50 meters away.

“We believe that Mr Surasak had an earlier altercation with the gang that attacked him,” Col Teerasak told the Phuket Gazette.

“He tried to get to the police station, but unfortunately could not get in through the side gate and became trapped.”

A staffer at the hospital confirmed to the Gazette today that he remains in critical condition.

Police are now searching for the gang of attackers.

“We have very little to go on, and there is no CCTV covering the area where the attack occurred, but we will check other CCTV cameras in the area,” Col Teersak said.

“We will question Mr Surasak after his condition improves.”