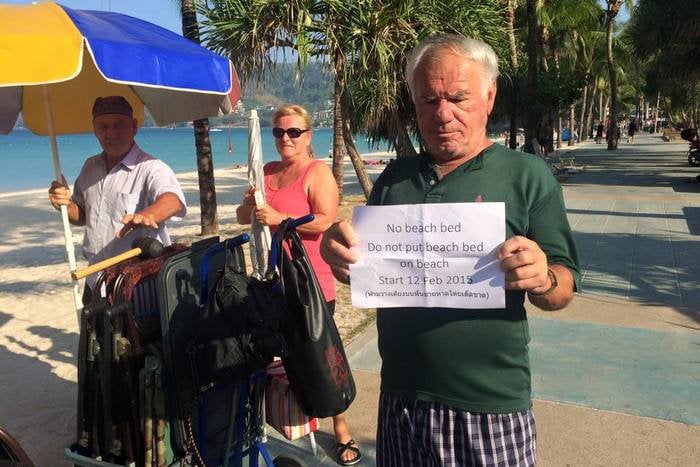 PHUKET: Patong Mayor Chalermluck Kebsup is calling for a compromise following several incidents on Patong Beach this week during which tourists became outraged after police asked them to remove their sun loungers from the sands in compliance with the new “no chair” policy.

Several videos and pictures have been circulating on social media sites capturing groups of tourists becoming upset when asked to remove their sun loungers from the beach – some even recording tourists vowing never to return to Phuket if chairs remain banned.

Patong Police Deputy Superintendent Akanit Danpitaksat told the Phuket Gazette that police have been facing resistance from tourists since they began enforcing the rule on February 12.

“Some people have been crying, some people have refused to move [their chairs] and some complain and say that they will never visit Phuket again. We have heard these things every day since we began telling people about the new rule,” Lt Col Akanit said.

“We have been as polite and understanding as we possibly can, but we must follow our orders.

“Thai people who travel abroad must obey the laws of whichever country they are visiting; why can’t foreigners follow Thailand’s laws?”

Ms Chalermluck told the Gazette that she is concerned about the effect these incidents will have on tourism.

“I understand where the tourists are coming from, especially the elderly. They are more comfortable on the beach if they have a lounger,” Ms Chalermluck said.

“On one hand, if we let tourists use their loungers, we will receive complaints from the public regarding our lack of enforcement of the ban. On the other, when we do our duty, the tourists complain.

Although Ms Chalermluck confirmed that the chair ban is policy and police must carry out their duties in accordance with it, she said that she has spoken to Phuket Governor Nisit Jansomwong about the issue.

“I have spoken to Governor Nisit several times about this. I requested that we allow elderly tourists to use their loungers in the 10-per-cent sections of the beach where vendors are allowed. This would satisfy both tourists and the public,” she explained.

However, Ms Chalermluck said that the island’s authorities have yet to find a solution.

“I don’t want to place the blame on anyone for this. Everyone is doing what they are supposed to do. However, all relevant government offices need to meet, and discuss whether or not they want to follow the rules, satisfy the tourists or find a solution somewhere in the middle,” she said.