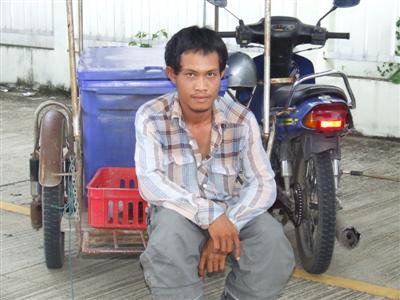 THEPKRASATTRI, PHUKET: A motorbike driver run over by a bus late Saturday morning is the latest fatality in a road accident involving a salaeng, or motorcycle fitted with an illegal sidecar.

Mr Maitree was riding his motorbike at high speed on Thepkrasattri Rd southbound in Ban Muangmai near the Susco gas station when he slammed into the rear of a salaeng driven by 30-year-old Russadee Samae, a native of Pattani.

The force of the impact sent Mr Maitree, who was not wearing a helmet, flying though the air.

He landed 10 meters away in the passing lane, where he was killed instantly after being run over by a double-deck tour bus operated buy the Chaiwut Jaruphan tour company.

There were no passengers on board at the time.

The salaeng, laden with a large cooler full of milk, also carried a 15-year-old boy identified only as Bareng.

Most salaeng drivers on the island eschew safety helmets, but fortunately for Mr Russadee he was wearing one at the time of the accident.

Showing the Gazette where the helmet cracked down the middle from the force of the impact when his head hit the pavement, he said, “Maitree was driving very fast and hit the back of my salaeng very hard, causing me and Bareng to come off. The salaeng ended up about five meters away near the median strip.”

Thanks to the helmet, Mr Russadee suffered only minor injuries to his left ankle. The boy suffered a laceration to his left foot. It required 18 stitches to close.

Bus driver Samai Tongnoppakhun, 35, told police he was unable to stop the bus in time.

Police are still investigating the crash and have yet to establish who was at fault.

The crash comes less than five months after an accident on the same road that left two bus passengers dead and 30 injured.

That accident was caused by a salaeng on the wrong side of the road that veered suddenly, causing the bus driver to lose control of the vehicle.

Using modified motorbikes is against Thai traffic law but the laws are rarely enforced in Phuket, which has an average road accident mortality rate of about one victim per day.