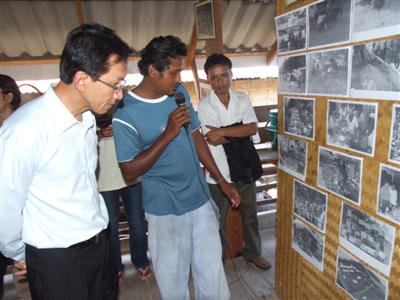 PHUKET: The government has set up a national-level committee aimed at resolving land rights issues and other problems affecting Moken and other sea gypsy communities in the Andaman Coast region.

At all five villages land rights issues were among the problems raised, along with poverty and a loss of traditional culture and way of life.

In some cases, youths in the communities no longer know how to fish or speak the language of their ancestors, Mr Teera was told.

Despite some of the communities having been established over 100 years ago, most sea gypsies do not have title deeds to the land they inhabit.

In some cases the land is state property, but in other cases, most notably in Rawai, the land is claimed by private sector landholders with title deeds who want to evict them.

“The government has set up the national committee and appointed me as chairman. This committee will resolve the problems of sea gypsy and Moken communities in Phuket, Phang Nga, Krabi and Ranong,” Mr Teera promised.

The government would be flexible in finding ways to resolve land rights issues on a case-by-case basis.

Communities inhabiting state land will be allowed to remain there, he said.

In cases where other parties claimed the land and had title deeds to prove it, the committee would conduct a study to see if the title deed was issued before or after the community was established.

A provincial committee on sea gypsy issues will also be set up in each province with the provincial governor chairing the panel, he added.

The Culture Ministry will also build “culture centers” in each village to help preserve their way of life and educate future generations. Phuket is set to receive 10.2 million baht to set up five centers in fiscal 2010.

These centers will be promoted by the Tourism Authority of Thailand as a way of generating extra revenue for the communities.

Many other countries use local culture, including that of indigenous tribes, to promote tourism, he said.

The government is committed to establishing sustainable tourism that will benefit all sides, he added.

Sea gypsies is a general term used in English to refer to people commonly called chao ley (“sea people”) by Thais, though the government typically refers to them as khon thai mai (“new Thai people”) as part of its efforts to integrate them into mainstream Thai society.

Some sea gypsies in Phuket are part of the Moken (or Morgan) tribe of seafaring people, while others belong to the Ourak Lawoy tribe.

Man run over by bus in Thalang

Paiboon “not worried’ about EC ruling