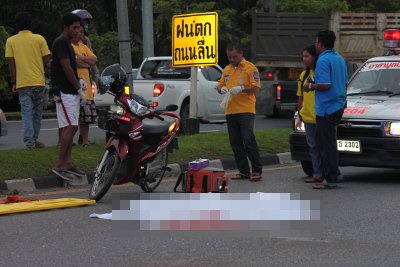 PHUKET: A man believed to have been drunk was struck dead by a six-wheeled truck on Phuket’s busy Thepkrasattri Road at about 6pm today.

Witnesses told the Phuket Gazette that the man was first seen slowing drivers down on the northbound lanes near the u-turn about 50 meters south of the Tah Reua Chinese Shrine.

The man motioned drivers to stop then climbed up onto the hoods of cars, one witness said.

Angry, one motorist sped off, prompting the man to step across onto the southbound lanes, where he was killed by the truck.

By 6:30pm long tailbacks were seen stretching into distance in both directions.

Motorists are urged to avoid the area, if possible.